Showing posts from October, 2012
Show All

By NB - October 31, 2012
It was sixty-six years ago this month that Nobel prize winner Ernest (Ern) Rutherford  (1871-1937), the "father of nucelar physics" passed away. He was interred in Westminster Abbey, surrounded by the ashes of scientists such as Sir Isaac Newton. Rutherford was 66 when he died.  Following his death an obituary in the New York Times said, "It is given to but few men to achieve immortality, still less to achieve Olympian rank, during their own lifetime. Lord Rutherford achieved both.” Despite his intellectual achievements, Rutherford, or Ern as he was called, was said to be a humble man. Physically, he was large, and quite the talker. He had a tendency to spill his tea on his waistcoat, to which wife, Mary, would proclaim, “Ern, you’re dribbling.” Mary had marched with the suffragettes in London and not surprisingly, Ern was a huge supporter of women studying the sciences.  His very first research assistant, Harriet Brookes, assisted him in the discovery of radon while a
Post a Comment
Read more

By NB - October 17, 2012
We all love a stirring milestone, and this one is up there with the best of them. The 30th September marked fifty years since New Zealand set up its own office of the Ombudsman – the first country outside of Scandinavia to do so. Loosely translated, the word Ombudsman  means “grievance person”. That's just what they are - the “go to” people if you’ve got a gripe with your school’s board of trustees, the EQC, IRD, the ACC or any government department.  Ref: A dispute amongst workers, AWNS-19080917-12-1, Sir George Grey Special Collections
Post a Comment
Read more 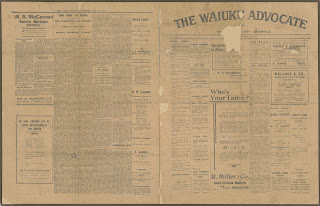 The Auckland Heritage Festival 2012 might be over and the 'Black and White and Read All Over' newspaper tool kit published but we still have interesting heritage newspaper related stories to tell .... In the early years of the last century, almost every New Zealand town supported its own newspapers, each with a strong local flavour and full of local information. The small towns of Franklin, to the south of the Auckland urban area, were no exception. Franklin’s oldest newspaper was founded in Pukekohe in 1912. It was known as the Pukekohe & Waiuku Times until 1919, the Franklin & Pukekohe Times until 1921, and then simply as the Franklin Times until 1971, when it was absorbed into the South Auckland Courier family (the title was later briefly resurrected). Ref: The Waiuku Advocate, 18 June 1914, South Auckland Research Centre ﻿Further to the west, Waiuku’s first newspaper, the Waiuku Advocate was founded in 1914. This became the Waiuku News in 1915, which
Post a Comment
Read more

By NB - October 11, 2012
The poet Thomas Bracken (1841-98) was born in Ireland and orphaned at a young age. He was sent to Australia to live with an uncle, near Melbourne. He was initially apprenticed to a pharmacist but later worked as a station hand and shearer. His first volume of verse appeared in 1867, and there was a steady output from his pen until his final years. Listen to the Real Gold podcast on Auckland Libraries Soundcloud . Bracken moved to Dunedin in 1869, and concentrated on journalism, working at the Saturday Advertiser . In the edition of 1 July 1876, he published a five-stanza poem of his own composition entitled ‘National Hymn’ and announced a contest with a prize of ten guineas for the person who composed the best musical setting to accompany his words. The judges were trio of reputable Melbourne-based German-born musicians: Herr Zelman, Herr Siede and Herr Zeplin. They unanimously chose an entry submitted by John Joseph Woods , head teacher at St Patrick’s Catholic School in t
Post a Comment
Read more

By NB - October 10, 2012
﻿ ﻿ Ref: WWI memorial, Birkenhead, B0314,   North Auckland Research Centre Plans are already underway for the World War I centenary commemorations, which will run from 2014-2018.  ﻿ ﻿ ﻿﻿﻿﻿﻿﻿﻿  Ref: Glen Eden School WWI memorial, JTD-12A-00990-1, West Auckland Research Centre The New Zealand WW100 website, a hub for the commemorations, includes a wealth of information about the formal projects and activities planned by the New Zealand Government, such as the National War Memorial Park in Wellington . It also includes details on how the public and institutions can get involved . ﻿
2 comments
Read more 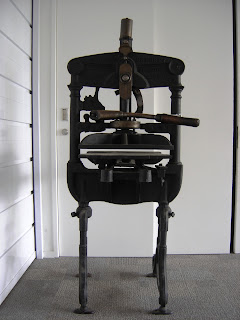 Anniversary of opera in NZ 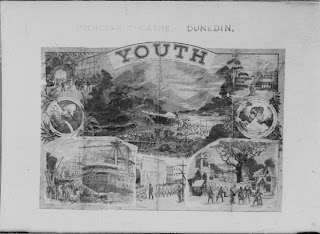 One hundred and fifty years ago, New Zealand enjoyed its first professional opera performance at Dunedin’s Royal Princess Theatre – the country’s first purpose-built theatre. Dunedin had become home to the newly rich who were in need of some 'refined' culture, a sentiment echoed by those tired of the “limited sources of entertainment” offered by grog-shops and other equally seedy places on the Otago goldfields. ﻿ Ref: Poster for Princess Theatre, 31-62787, Sir George Grey Special Collections
Post a Comment
Read more

When sugar was good for you ... 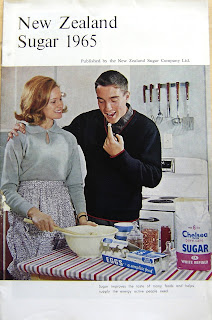