Showing posts from November, 2012
Show All

By NB - November 29, 2012
A book about the children who lived in children's institutions in Hawkes Bay has been written by Dr Kay Morris Matthews , an acclaimed academic historian and author. It will be launched on 22 November by John McKinnon, a Hastings resident who grew up in France House, a home in the Esk Valley for teenage boys. ﻿ Ref: 4-3681A-57, Parnell orphanage, Sir George Grey Special Collections Entitled entitled 'Who Cared? Childhoods within Hawke’s Bay Children’s Homes and Orphanages 1892-1988', the books covers the experiences of thousands of youngsters who were orphaned, illegitimate, abandoned or destitute.
Post a Comment
Read more

By NB - November 27, 2012
Sixty years ago, the 2nd Battle of El Alamein , the battle that turned the war towards the allies' favour, was fought in North Africa. Recent commemorations saw New Zealand veterans invited to the El Alamein Commonwealth War Graves Cemetery in Egypt to remember New Zealand and allied forces; fortunately many of their stories now live on in the written and oral histories. ﻿﻿George Mackay from Westport fought at Tripoli and in The Desert Rd  recounts the thoughts that go through one’s mind leading up to battle. “You don’t know what to expect.. . It’s an uncanny moment, zero hour. Everything’s going through your mind, whether you’ll survive, whether you’re going to get killed, blown up or shot at, or anything like that. What’s going to happen? What’s it going to be like? You don’t know. All those things are going through your mind and then finally its zero hour and the shelling starts. Then you’re waiting for the Germans to retaliate with their shells.  That’s what it’s all about.
Post a Comment
Read more 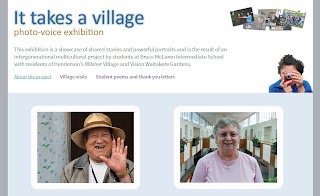 In May 2012 the work of students from Bruce McLaren Intermediate School brought local life to the walls of the West Auckland Research Centre through the 'It takes a village: photo voice' exhibition (see post on 25 May 2012 if you want to read more about the exhibition). Today it is back in a new form as a   virtual experience of the original physical exhibition . This gives it the potential for reaching a regional, national and even international audience! ﻿ Ref: Home page, It takes a village website, West Auckland Research Centre Village residents and students are pleased that then are now able to send friends and family a link to the exhibition which highlights the work of the students. Ref: Vision Waitakere Gardens, It takes a village website, West Auckland Research Centre ﻿﻿ Each village link includes stunning portraits and narratives reflections of the conversations captured between students and older residents. Read more about the project . ﻿ Ref: Wilsh
Post a Comment
Read more

By NB - November 19, 2012
It’s dead good Waikumete Cemetery in Glen Eden is one of the most significant heritage places managed by Auckland Council. At 108 ha, it is New Zealand’s largest cemetery, the second largest in the southern hemisphere, and the resting place of over 60,000 people, some of whom played an important role in our history. The cemetery is just one of the many heritage assets owned or managed by Auckland Council on behalf of the community. Ref: JTD-12AA-02366-3, West Auckland Research Centre The cemetery opened in 1886 as a replacement for the overcrowded Symonds Street Cemetery. It was laid out by denomination and contains many historic graves and memorials of heritage significance. It includes a children’s section, soldiers’ cemetery, large lawn cemetery, Māori urupa, mass grave of over 1000 flu victims from 1918, and a memorial to the 1979 Mt. Erebus Air Disaster. The cemetery also contains a notable group of mausoleums and the historic Faith-in-the-Oaks Chapel (1886), Sexton’s Hous
Post a Comment
Read more 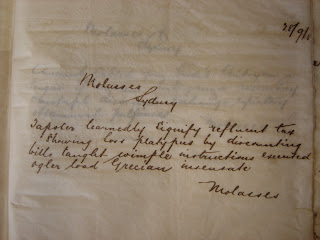 Recently a customer was searching through old letterbooks in the Chelsea Archives at Birkenhead Library. Tissue thin pages, eye-watering  italic script, crumbling pages, circa 1889 – that sort of thing. He was hoping to find reference to his grandfather. Instead he found curious little notes. Which would be fine, except they seem to be nonsense: Ref: 'Platypus', Chelsea Archives, Birkenhead Library
Post a Comment
Read more

The Golden Age of Purgation

By NB - November 01, 2012
Constipation was an obsession in the early 20th century. It was thought to pollute the blood and in turn cause everything from bad breath to liver failure, madness or syphilis. In books such as “The Conquest of Constipation” doctors warned that the contents of the colon created “sewer-like blood” leading to 90 percent of disease. Ref: AWNS-19220615-35-5, Sir George Grey Special Collections “How can I emphasise enough the importance of bowels in those days?” wrote New Zealand author Ruth Park. As a child in Te Kuiti she was forced to drink castor oil every day. “It was given to me in orange juice on the top of which it floated in a viscid greenish layer. I wanted to throw up before I drank it.”
1 comment
Read more
More posts