Showing posts from January, 2013
Show All

By NB - January 30, 2013
We had an interesting reference query at the North Auckland Research Centre the other day, about the old age pension (superannuation) in New Zealand. When did it start? Was it ever for 55 year olds? What dates were the changes to it made? The original 1898 pension .... It was a fascinating journey finding out the information. Old age pensions in New Zealand were first introduced in 1898 for people 65 and up. The new pension was subject to a means test, and the requirements were pretty stringent. The maximum amount someone could receive was set at 18 pounds per annum, which equates to about $36 in today’s currency. This scheme lasted for 40 years, and it shaped the subsequent Social Security Act of 1938 . Ref: JMB01, Grace Barr (centre) & family group, c. 1900, Rodney Image Collections, North Auckland Research Centre
Post a Comment
Location: 44 Lorne Street, Auckland, 1010, New Zealand
Read more

Indexing 'Sons of the Soil'

By NB - January 29, 2013
Lily Lee and Ruth Lam, the authors of the book ' Sons of the Soil ' have done a good job of pulling together what little 'original' documentation there was available about early Chinese market gardeners - such as newspaper articles, account books, photographs. The families described in the book sometimes set up gardens in different parts of the country and moved around and frequently inter-married. So staff at the Central Auckland Research Centre decided that it would be very useful to index families mentioned in the book and add this information to Auckland Libraries heritage online database: Index Auckland . The goal was to help people track down the families mentioned in the book and set up useful connections. Index Auckland is a rich resource of history, art, theatre, film and music references sourced from Auckland area newspapers and journal articles. Whilst the index predominantly covers Auckland, other regions are also covered, which means that the index a
Post a Comment
Location: 44 Lorne Street, Auckland, 1010, New Zealand
Read more

The Man and the Memorial 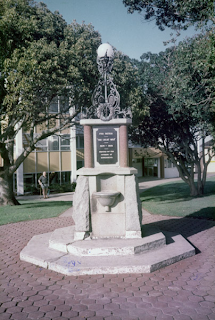 For over 40 years I have passed the WW1 Memorial in the Nell Fisher Reserve (originally known as Civic Park) and been aware of its changing condition.  At times it has looked neglected, the drinking fountain broken, its bowl filled with cement and the lighting disconnected and the glass globe shattered or non-existent.  Former North Shore mayor Paul Titchener noted in his article in 1982 on the monument that “the passing years have not been kind to it" (Titchener, Paul. Beginnings, vol 6, p.44). When the new Birkenhead Library was built in 2010, the surrounding park was landscaped  and the memorial was expertly restored, creating a revitalised space . Some of this work is described in a Salmond Reed Architects Limited report . Although drinking from the fountain is no longer an option, the globe light has been replaced and it glows through the park trees, highlighted at night, that surround it. Ref: B0319, Nell Fisher Reserve Memorial, North Auckland Auckland Research C
Post a Comment
Location: 44 Lorne Street, Auckland, 1010, New Zealand
Read more 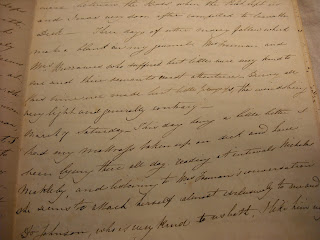 During March 1840 Sarah Louise Mathew travelled by ship from Sydney to join her husband Felton Mathew in the Bay of Islands. He was acting Surveyor-General in Governor William Hobson’s party of officials and had just witnessed the signing of the Treaty of Waitangi in February. Sarah (1805?-1890) had emigrated to Australia to marry her first cousin Felton in 1832. Her diary, begun on the voyage to New Zealand on March 2nd 1840, is held in the Sir George Grey Special Collections ( NZMS 79 ). It is one of a number of interesting documents written by both Sarah and Felton in the early years of settlement, which Professor James Rutherford researched in England and negotiated to add to the Library’s collection in 1940. Sarah’s journal is full of sharp observation, interesting speculation and some shrewd opinions on the people and places that were so new to her. However, one of her comments in the diary has always intrigued me. This is her entry for March 7th 1840: “This day being a li
1 comment
Location: 44 Lorne Street, Auckland, 1010, New Zealand
Read more

New addition to the names of those buried in St Stephens Cemetery, Parnell

By NB - January 09, 2013
Here at the Central Auckland Research Centre, every so often I am able to add one or two more names to the records we have of those buried in Symonds Street Cemetery, in Grafton. However, it is very rare to be able to add a new name to those buried in the St Stephens Cemetery, in Parnell. Ref: 4-8857, Sir George Grey Special Collections The last survey, a photographic one of all the remaining headstones, was carried out in May 1995 and  so I was most surprised to hear about a 1977 burial.
3 comments
Location: 44 Lorne Street, Auckland, 1010, New Zealand
Read more
More posts