Showing posts from August, 2019
Show All

Curtain Up! Acting women talk about their lives

Curtain Up! is a snapshot of the Auckland theatre scene from the 1950s to the 1980s. This Heritage Collections exhibition was held at Tāmaki Pātaka Kōrero | Central City Library from 28 August until 24 November 2019. It explored the rise of professional drama in Auckland from its grassroots in community and youth theatre. Image: Howick Studios. Members of the Howick Little Theatre in rehearsal, August 1964. Auckland Libraries Heritage Collections, Footprints 06723 . This audio playlist compliments the exhibition, drawing on the recollections of those active in Auckland theatre development during these decades. Recordings are from an oral history collection  (Auckland Libraries Heritage Collections, OH_1341) featuring women in Auckland who worked in the acting profession, with interviews by Jean Hyland. In this track we feature Georgia Prince from Auckland Libraries, life time actor Elizabeth McRae, esteemed playwright Roger Hall and the woman who has played every role in
Post a Comment
Read more

The price of progress 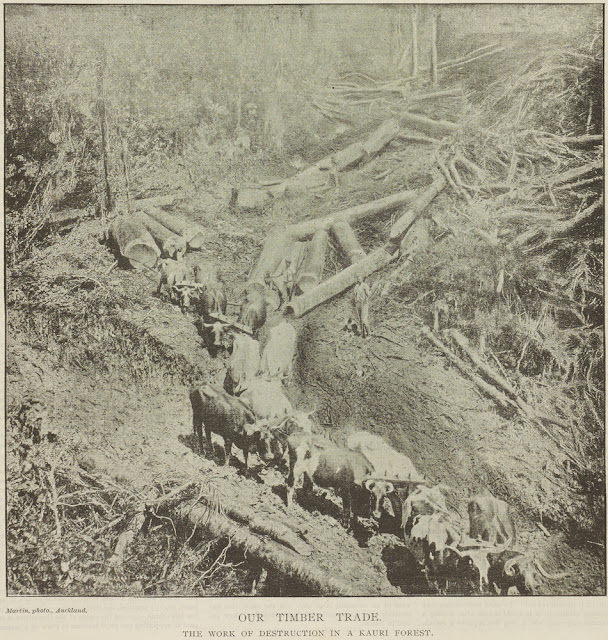 The way some individuals and companies exploit our environment seems to be a very twenty-first century concern. However, photographs published in the New Zealand Graphic one hundred years ago show people were starting to realise New Zealand’s natural landscape and resources had been seriously degraded by extractive nineteenth-century industries and farming techniques. On 6 May 1893 the New Zealand Graphic published a photo with the stark caption, ‘Our timber trade: the work of destruction in a kauri forest.’ It showed a jumbled mass of logs already felled by bushmen. Bullock teams were being harnessed to drag the logs from the forest; probably to a bush tramway and then to a sawmill. Ref: Martin. Our timber trade, the work of destruction in a Kauri forest, 6 May 1893. Auckland Libraries Heritage Collections NZG-18930506-409-1 Sixteen years later in 1909 the Graphic published a page of photos entitled simply ‘How the Dominion bush is vanishing.’ The series showed a do
Post a Comment
Read more

Threlkeld, Biraban, and the Awabakal manuscripts at Auckland Libraries 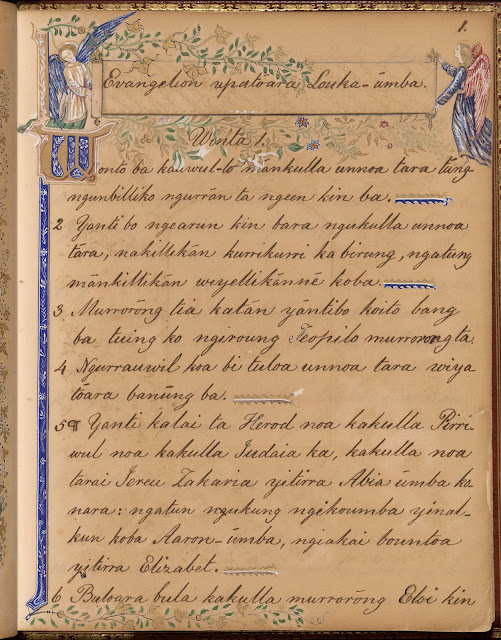 Held in the heritage collections at Auckland Libraries are two unique manuscripts written in the indigenous Australian language known today as Awabakal. Prior to colonisation, this language was spoken by the Aboriginal peoples of the Hunter Valley and Lake Macquarie area of New South Wales. During the twentieth century, its survival was at risk, however, it is now part of an indigenous language rediscovery movement in Australia. Original texts are important sources for language rediscovery as they record the language when it was spoken widely. To aid this project, and as a contribution to the International Year of Indigenous Languages in 2019, Auckland Libraries has digitised these two manuscripts –  Evangelion unni ta Jesu-um-ba Christ-ko-ba Upatoara Louka-umba  and  An Aboriginal and English lexicon to the Gospel according to Saint Luke  - and made them available on  Kura Heritage Collections Online . During August they are also on display in the Real Gold case in the special coll
Post a Comment
Read more
More posts