Showing posts from March, 2015
Show All

Smorgasbord of stories - a taste of Waitakere's oral history 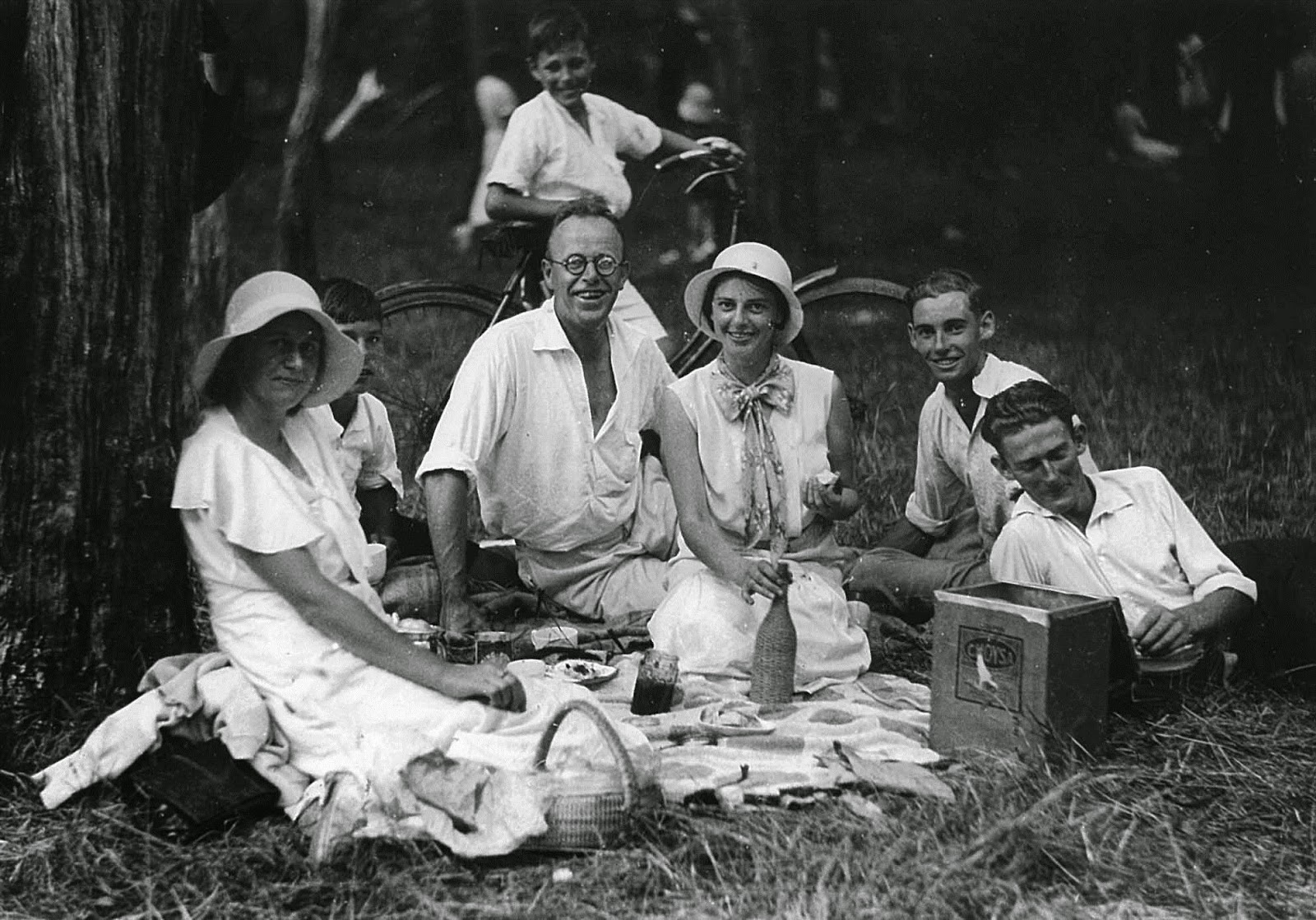 Currently on in the exhibition space on Level 2 of the Waitakere Central Library is an exhibition highlighting some of the stories of West Auckland contained in our collection of oral history recordings.   If you are interested in exploring any of these stories in more depth these and other recordings can be listened to in the J T Diamond Reading Room at the West Auckland Research Centre .  Ref: Picnic in Henderson, 1932, West Auckland Research Centre, Auckland Libraries.
Post a Comment
Read more

The bone people – the 30th anniversary of winning the Booker Prize 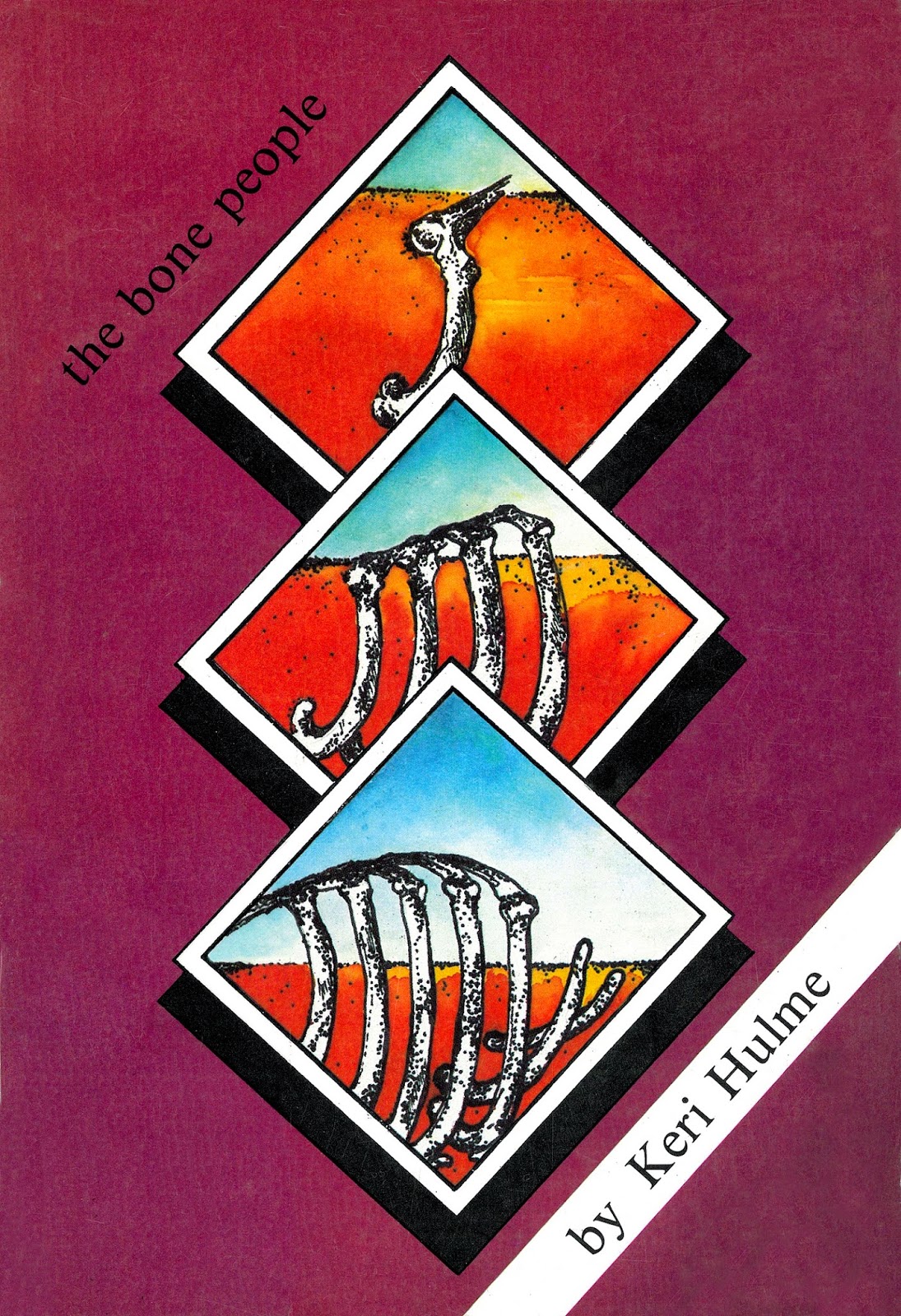 Keri Hulme’s masterpiece the bone people became the Auckland Writer’s Festival’s inaugural Great Kiwi Classic last year. The novel took 17 years to write and was rejected by every publisher in Australasia until the feminist collective SPIRAL brought it out in 1984 with a cover illustration by the author. The following year the bone people won the Booker Prize from a shortlist that included work by Peter Carey, Doris Lessing and Iris Murdoch.  Ref: the bone people, Cover, c1983, Sir George Grey Special Collections, Auckland Libraries, 823 HUL.
4 comments
Read more 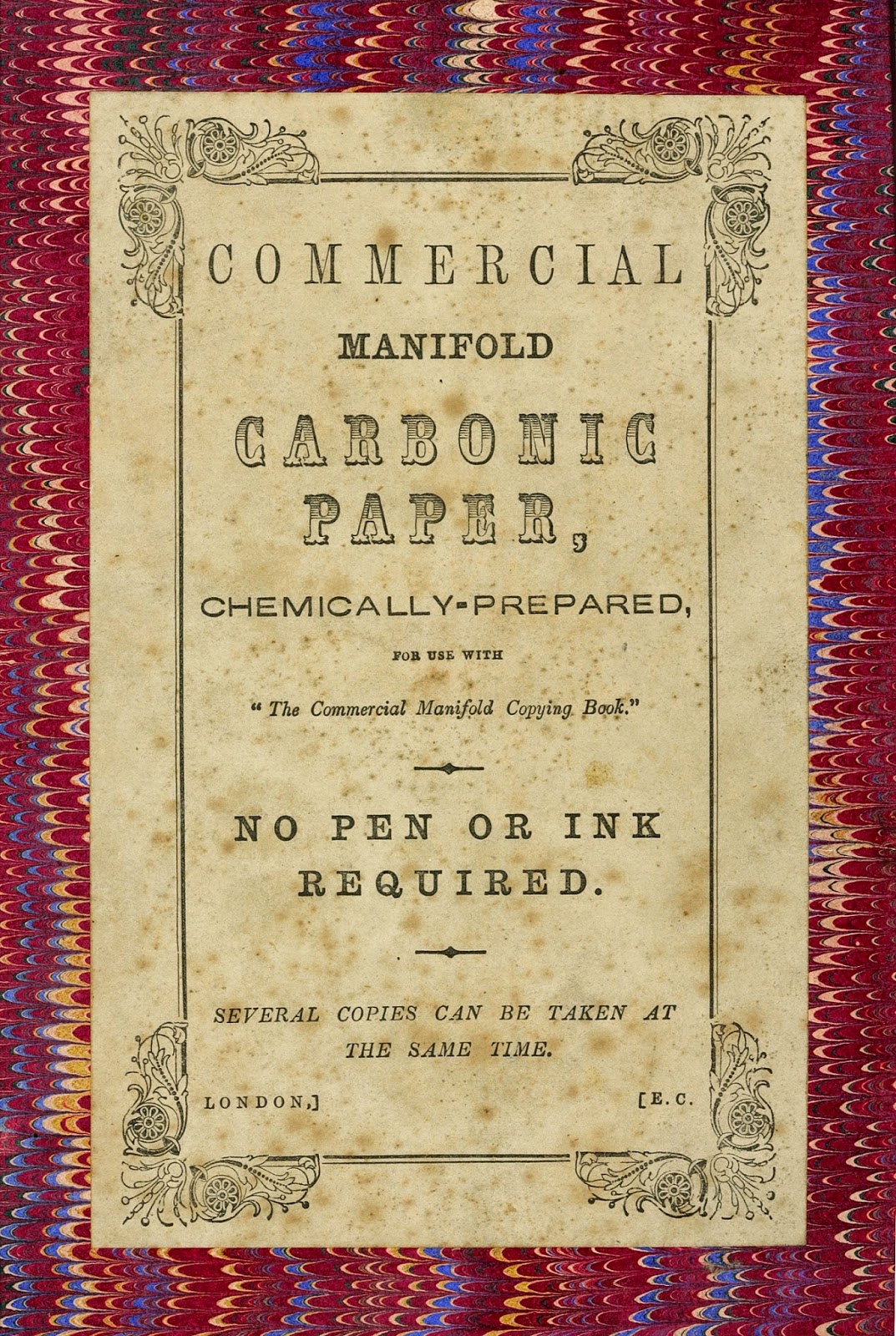 Today we are highlighting a couple of interesting items from our New Zealand Manuscripts collection: carbon paper manifold copying books. These two copying books show two of the most common uses for the technology.  The first of these is a letter book of a practising lawyer and contains business records as well as personal correspondence, while the second is a letter book as well as a diary. Ref: James Pirie's diary, Front endpaper detail, 1870s, Sir George Grey Special Collections, Auckland Libraries,  NZMS 427.
1 comment
Read more 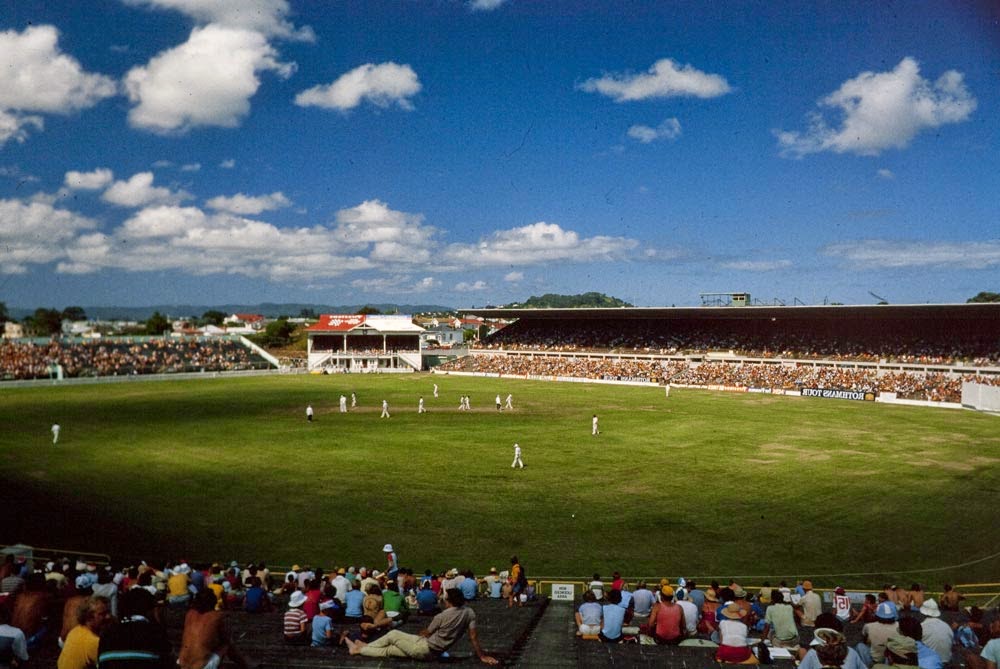 Over the last month New Zealand and Australia have been joint hosts of the latest edition of the Cricket World Cup. It started on 14 February in Christchurch and we have now begun the knockout stages. There are two remaining games in New Zealand: the quarter-final in Wellington on Saturday and the semi-final on Tuesday at Eden Park in Auckland. The final is at the Melbourne Cricket Ground on Sunday 29 March. Ref: Eric W Young, Showing a cricket game at Eden Park, 1980s, Sir George Grey Special Collections, Auckland Libraries, 1021-324.
1 comment
Read more

Gayest and Smartest: Auckland’s cinemas in the 1920s 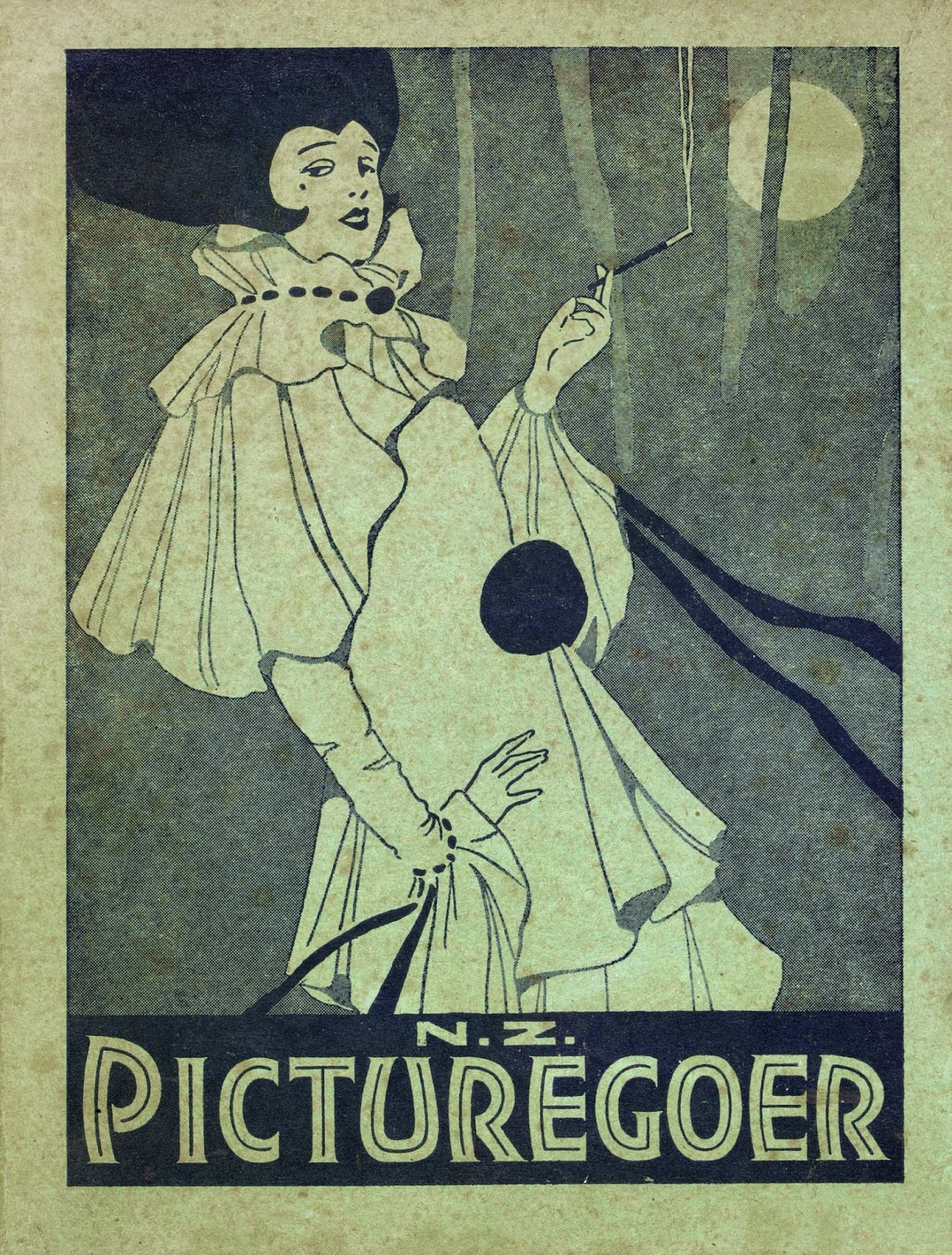 Auckland’s entertainment sensation of the 1920s was going to the movies – first silent movies, and then “talkies”. Every Saturday night, one-sixth of the city’s residents went to watch stars like Greta Garbo, Gary Cooper or Gloria Swanson in romance and adventure stories. The most-attended movie – Charlton Heston’s Ben Hur - sold 76,000 tickets during its Queen Street run, and Charlie Chaplin’s The Kid drew 21,000 people in a week. Ref: NZ Ephemera - 'The N.Z. Picturegoer', Volume 1, Number 7, 20 January 1928, Sir George Grey Special Collections, Auckland Libraries. However, not everyone was pleased with cinema’s popularity. One of Auckland’s main exhibitor’s, Henry Hayward, had to answer a complaint from the Discharged Prisoners’ Aid Society that movies normalised crime for children by encouraging them to play make-believe games such as bush-ranging. Ref: James D Richardson, Looking north down the west side of Queen Street, 22 January 1928, Sir George Grey Speci
2 comments
Read more

You all are living under a cloud if you didn't hear that most amazing sporting news of the past month. Forget the Breakers, Team New Zealand and the Cricket World Cup… the real news was that The Bushwhackers , that great wrestling tag team of the 70s and 80s, were inducted into the WWE Hall of Fame . This is huge. Mike Hosking even mentioned it on the telly during Seven Sharp. Here at the Central Library as part of our 1920s entertainment display, we've naturally included pro-wrestling because back in the day, like its boxing cousin , wrestling just exploded in popularity. By the thirties it had become a huge deal. Bouts filled halls all over the country – such as in the image below, taken in Masterton. Both promoters and wrestlers were out to make big money and the Dominion Wrestling Union was formed to promote the sport. Wrestlers – known as ‘matmen’ – came from all over the world looking for a match, and Monday nights at the Auckland Town Hall saw fans queuing early
Post a Comment
Read more

In the first week of February, Auckland Libraries was delighted to have hosted several events to support New Zealand Cemeteries Heritage Week, which was to celebrate the launch on Ancestry of the New Zealand Society of Genealogists (NZSG) cemetery microfiche. The cemetery microfiche was the culmination of almost 50 years' worth of work by volunteers from the NZSG - a painstaking process of recording and transcribing cemetery headstones from 1400 public and private cemeteries nationwide, including Māori urupa from 1800 right up until 2007. The official launch day was held on Monday, 2 February, 2015, at the New Zealand Society of Genealogists head office in Panmure where current NZSG President Gay Williams discussed the history of their Cemetery Collection and explained the work that was behind it. The launch made the news on TVNZ . Auckland Libraries hosted events for the following three days: S.S.Tararua  - our worst civilian shipwreck, 29 April 1881 - Gay Willia
Post a Comment
Read more 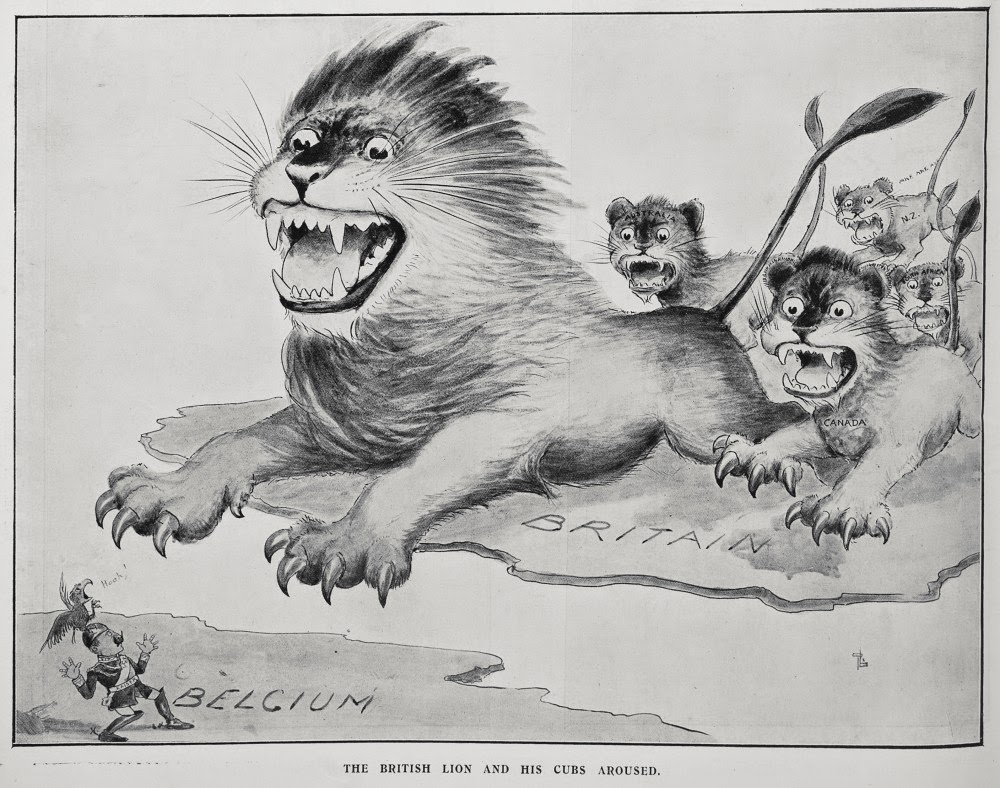 Trevor Lloyd was a New Zealand artist, illustrator and cartoonist who lived from 1863 to 1937.  He was largely self-taught although he might have had some lessons from the artist Louis John Steele.  He started doing sketches and caricatures but soon moved on to oil paintings based on his sketches. Lloyd first exhibited his work at the Auckland Society of Arts in 1883.  He re-exhibited at the society in 1896, 1898 and 1899.  By the 1900s he had moved to Auckland and was making a living from his art.  He began illustrating stories and articles in the New Zealand Illustrated Magazine and the New Zealand Graphic .  In 1903 he joined the Auckland Weekly News as an illustrator, graphic artist and cartoonist.  From 1904 his cartoons also appeared in Wilson and Horton’s other publication, the New Zealand Herald .  He retired from the Herald and Weekly News in November 1936. The Angela Morton collection , housed at Takapuna Library, holds a collection of original Trevor Lloyd cartoon
Post a Comment
Read more

James Hartley Warburton: A West Aucklander who served in WWI 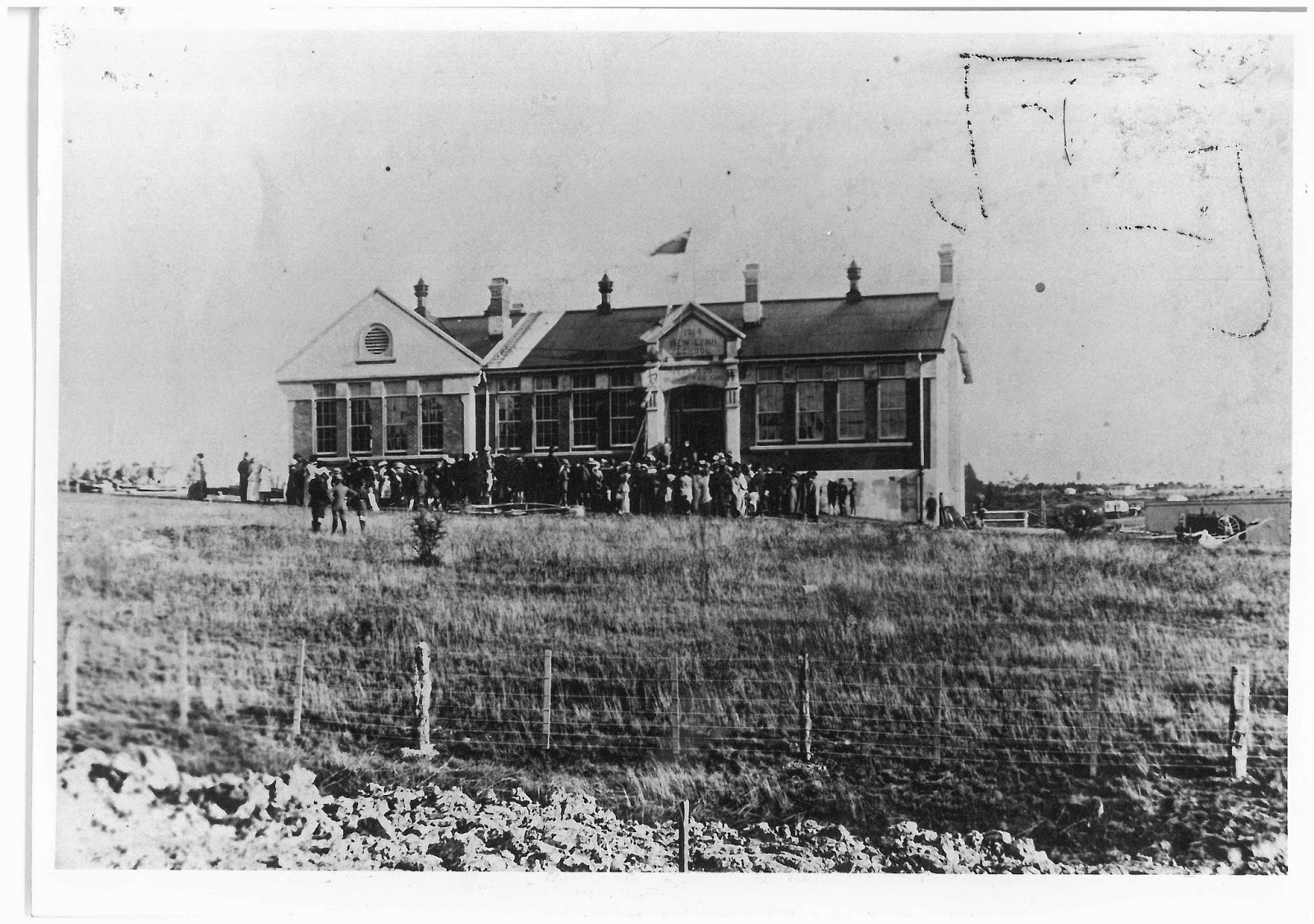 Eli and Selina Warburton of Lancashire, England, had 2 children, James Hartley and Edna, while living in England. The Warburton family immigrated to New Zealand in the early 20 th Century. The Warburton family: from Lancashire to New Lynn The 1901 UK census shows that at 3 years old James Hartley Warburton was living with his father Eli Warburton (31 years old), cotton weaver, his mother Selina Warburton (26 years), and his sister Edna (2 years old) at 18 Merton Street, Lancashire. The NZ Electoral Rolls show that the Warburtons were living in New Lynn by 1911.  If you would like to search the 1841-1911 UK Census records they are easy to access for free at any of the Auckland Libraries through the   Ancestry and FindMyPast databases  in the Digital Library. The New Zealand electoral rolls are available on microfiche at Auckland Libraries’ Research Centres as well as online at Ancestry. Opening Day at New Lynn School Ref: Opening day at New Lynn School, 1914, We
4 comments
Read more

Auckland Cup and racing at Ellerslie To celebrate Auckland Cup day at Ellerslie today,  we've  had look through various Heritage and Research collections held at Auckland Libraries to find out some the history around the Auckland Racing Club , the Auckland Cup and Ellerslie racecourse. Ellerslie Horses have raced at Ellerslie since 1857 when Robert Graham hosted a race meeting on his property, on the site which is now Ellerslie Racecourse. The Auckland Racing club then purchased thirty-six hectares of land from Graham in 1872 on which the course is situated. Ref: GB Scott Publications Limited, Ellerslie Racecourse, Auckland, New Zealand, 1970s, Sir George Grey Special Collections, Auckland Libraries, 996-1505.
1 comment
Read more
More posts