Showing posts from September, 2014
Show All

Our girls, our boys 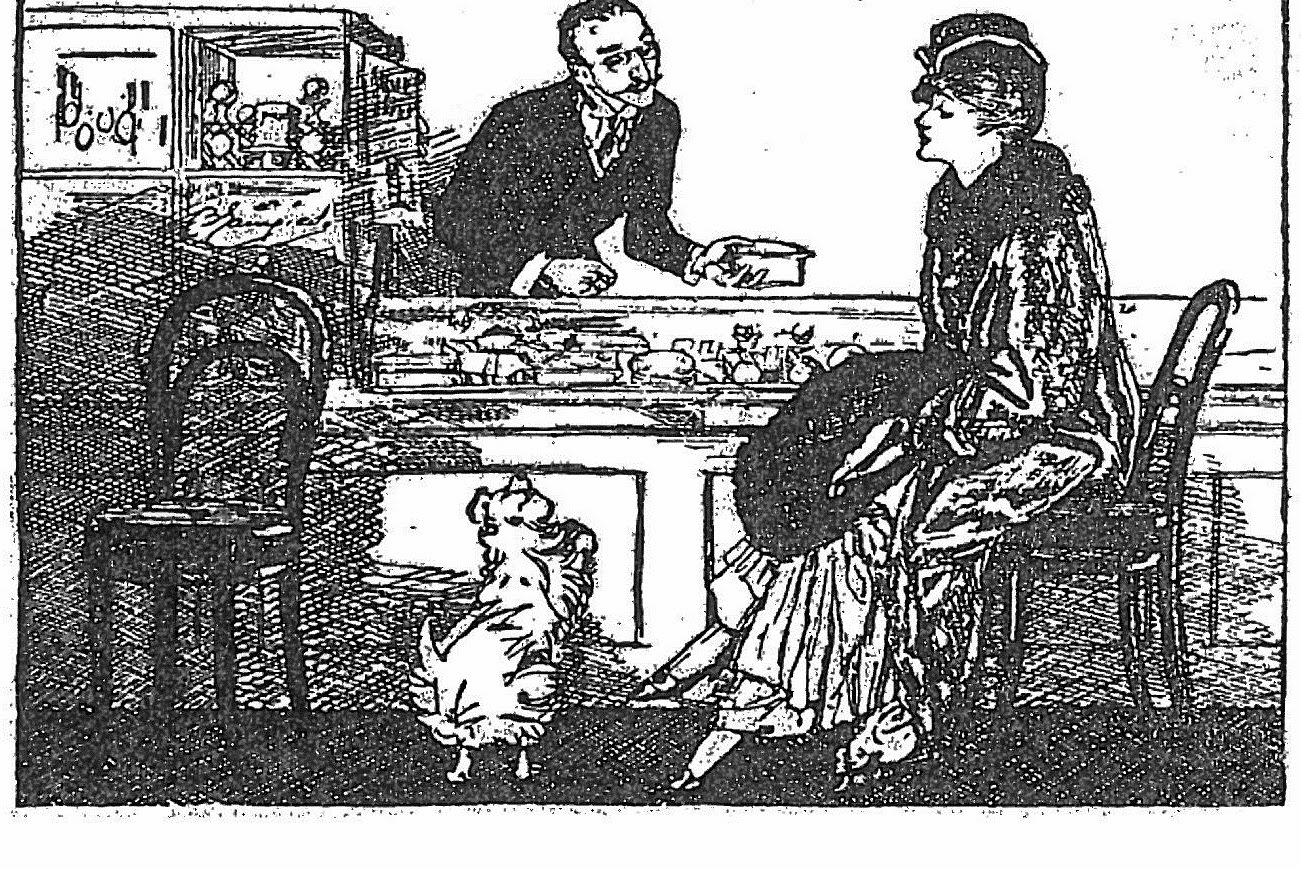 For the past few months, the heritage floor, on the second floor of the Central City Library, has hosted a display titled Our Girls -- a tribute to the role of women in the First World War. The content covers the following topics: prohibition and making-do, cartoon depictions of women, the anti-militarists, the fundraising effort, working girls, nurses abroad, and the absence of men. It has been an interesting exercise to find images to cover such a variety of topics. Women were not always portrayed favourably, especially in the political cartoons of the day. Publications like Freelance and Truth condemned the ‘wowser’ prohibitionists as out to spoil a boy’s fun (men did not escape the condemnation, either) or they depicted women as vain and ignorant.  Ref: Cartoon from the New Zealand Freelance , 6 March 1915, p.11.  The caption for the cartoon above reads:  Shopman: “Yes, Miss, all face powders have gone up in price on account of the war.” Young lady: “Oh
Post a Comment
Read more 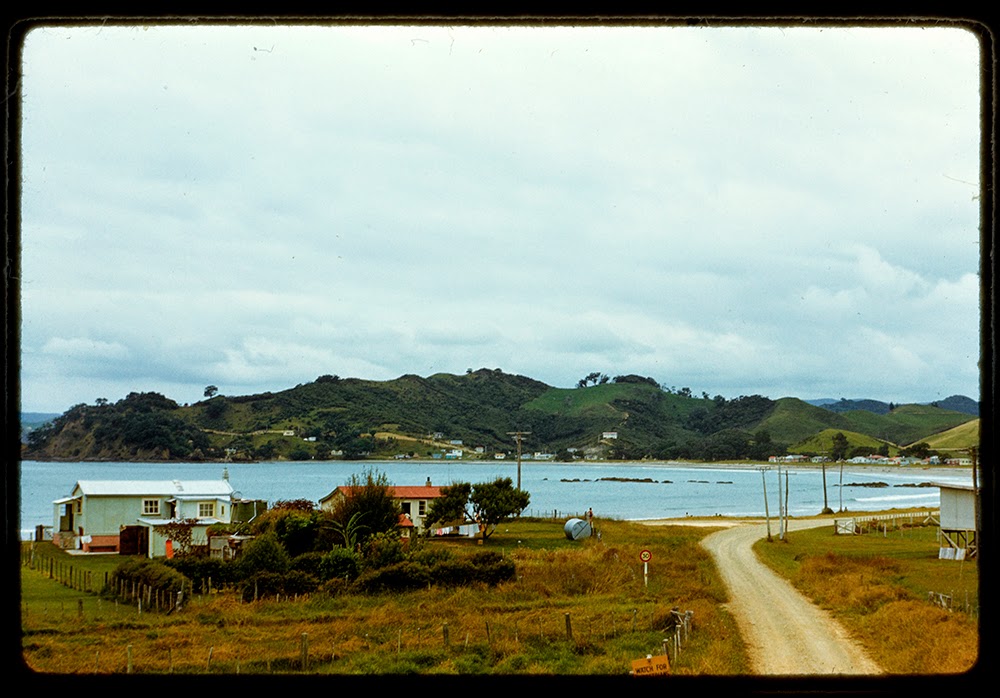 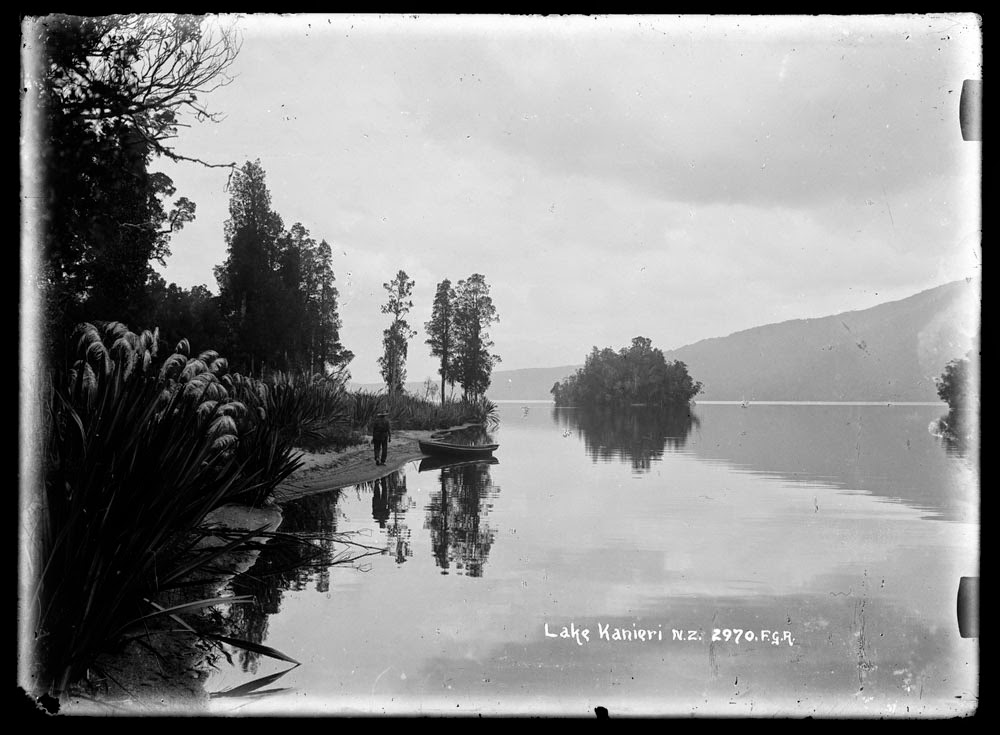 Sir George Grey Special Collections has a large collection of glass plate negatives of scenic views of New Zealand taken by Frederick George Radcliffe . Ref: F G Radcliffe, Lake Kaniere, Sir George Grey Special Collections, Auckland Libraries, 35-R644 Radcliffe came to New Zealand from England in the early 1890s. Soon afterwards his wife, Kate, and their two daughters, Harriette and Olive, joined him at his farm 'Utopia' near Paparoa, on an inlet of the Kaipara Harbour. Radcliffe's interest in photography grew and he quickly acquired a reputation as an exceptional scenic photographer. For twenty years he traveled the country taking photographs of small rural towns, large cities, rivers, gardens, buildings, beaches, wharves, forests, lakes and streets. From 1909, with the help of Kate and Olive, he operated a successful postcard business from his home in Whangarei. Radcliffe played the oboe, conducted local orchestras and was an active member of various music-relat
Post a Comment
Read more

Sometimes when a customer has navigated their way up two flights of escalators and come across the  Sir George Grey Special Collections exhibition room, they might decide to go through another set of glass doors to the reading room for a look around. At this point, they might scan recent acquisitions displayed in a case or walk around the edges of the room looking at the books-about-rare-books on the shelves. Next the person at the reading room desk might walk over and say 'hello' and tell them a bit about the collection. And thankfully, there is always the book  Real Gold on hand: making the task of briefly outlining the wonderful, varied and expanding Sir George Grey Special Collections much easier. Ref: Iain Sharp, Real gold: treasures of Auckland City Libraries, Auckland: AUP, 2007. When Real Gold was published in 2007 there was a physical exhibition to coincide with the book launch. In addition, there is an online version of this exhibition which gives detailed
Post a Comment
Read more

From gothic skyscrapers to Hathaway cottages 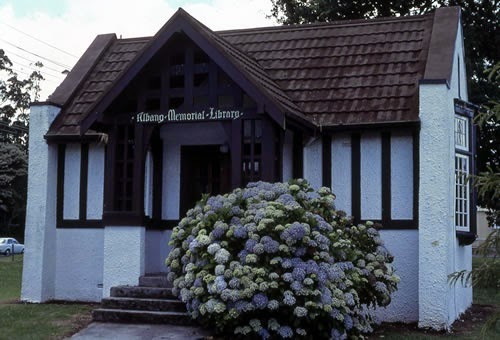 Dotted around Auckland are a number of residential and commercial buildings designed by Canadian architect Sholto Smith (1881-1936) which are now part of Auckland’s architectural heritage.  While researching Auckland’s War Memorial libraries for the Our Boys  website, I discovered Smith was noted as the designer of the gorgeous, little Albany War Memorial Library - although there is some controversy over whether it was Smith or his business partner, Thomas Mullions who played the bigger part in the design. Ref: Jock Phillips and Chris Maclean, Albany War Memorial Library, about 1986, from nzhistory.net.nz Smith arrived in New Zealand in 1920, when he was 39 years old, and joined the architectural practice of TC Mullions and C. Fleming McDonald.  He became partner after McDonald’s death and together with Mullions went on to design both residential and commercial properties. Among them the Shortland Flats in downtown Auckland which the pair owned as a venture to generate inco
Post a Comment
Read more 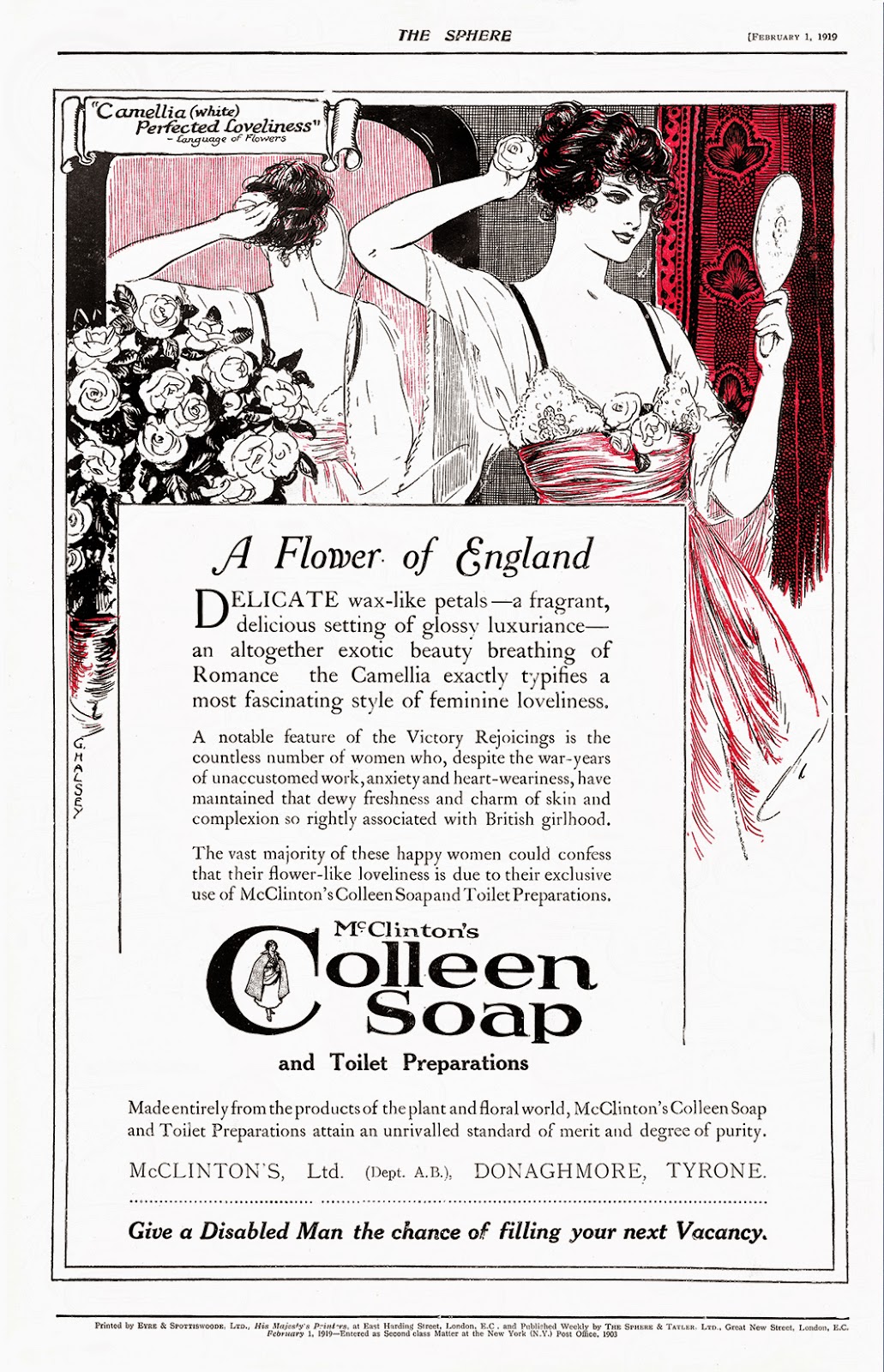 Recently, an advertisement from a page in a journal, displayed in the current  Sir George Grey Special Collections  exhibition:  World War 1914 -1918 , made me look closer. The product is soap and the accompanying illustration is not unusual or incredibly striking. It was the text which made me pause, as it reminded me of scenes in Pat Barker's novel  Regeneration . In particular, the lives of a group of munitionettes, who provide an insight into an element of home front life during the First World War. Ref:  The sphere. Vol. 76, no. 995. London: Illustrated Newspapers, 1918. Munitionettes were British women employed in munitions factories during the First World War. These women worked with hazardous chemicals on a daily basis with minimal protection. Receiving an injury or getting killed by an explosion were always possibilities. Many munitionettes worked with TNT, which after prolonged exposure, would turn their skin a yellow colour -- leading to the name 'canary gir
2 comments
Read more 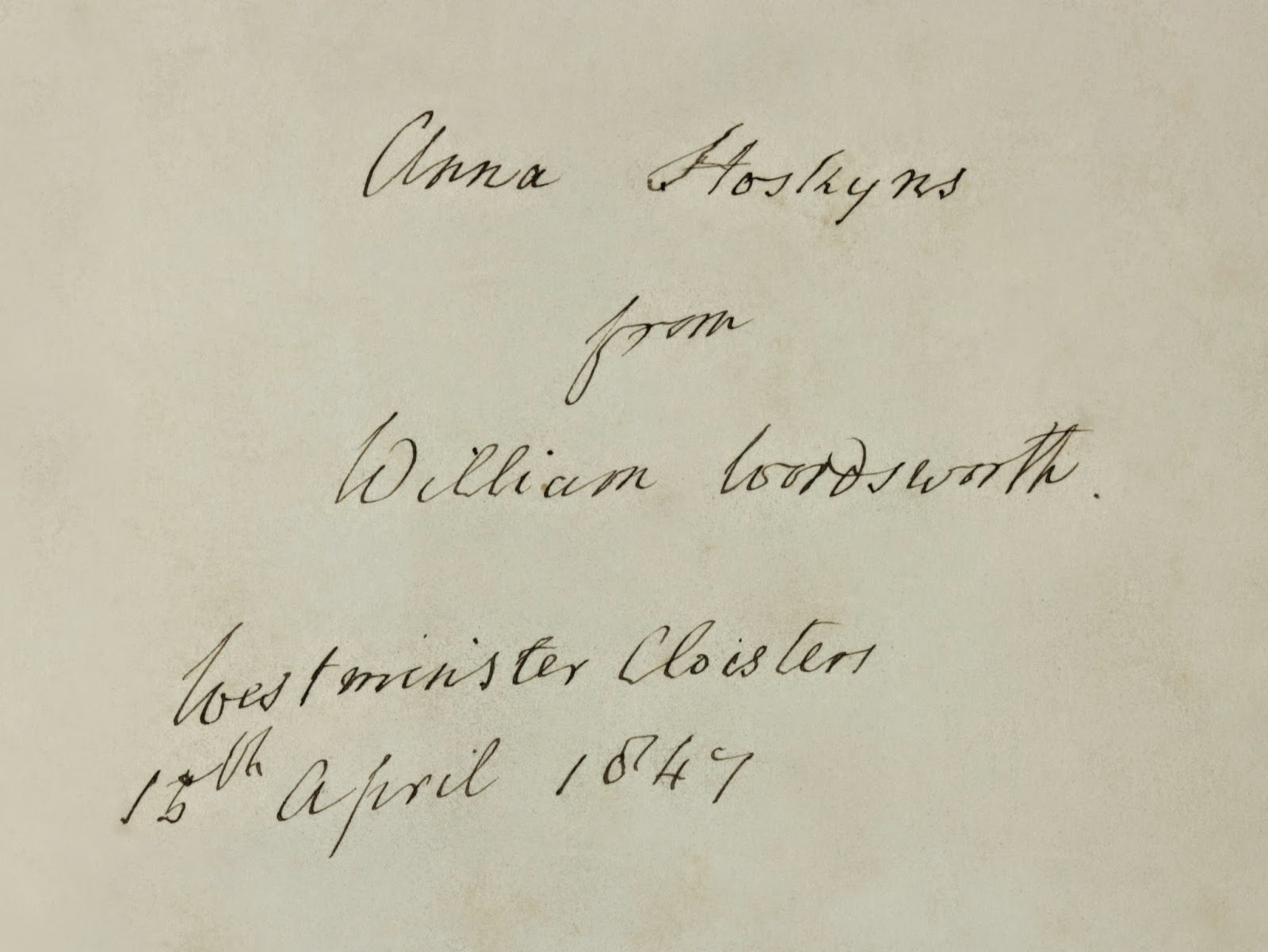 In recent years Auckland bibliophile and historian John Webster has been a generous donor to Sir George Grey Special Collections . Among the items he has gifted to the library is an 1845 edition of 'The poems of William Wordsworth '. The book is in superb condition for its age, but what makes it of particular interest is the hand-written inscription on the second leaf, which reads: “Anna Hosykns from William Wordsworth, Westminster Cloisters, 15th April 1847.” Ref: Second leaf inscription from 'William Wordsworth, 'The poetical works...'  London: Edward Moxon, 1845.' Sir George Grey Special Collections. The writing matches other surviving examples from the poet’s pen. Biographies and Wordsworth’s published letters verify that he was acquainted with Anna Hoskyns. Anna’s maiden name was Ricketts. Born in 1814, she belonged to a family that became part of Wordsworth’s circle in the late 1830s. She was among the group of friends that accompanied the po
Post a Comment
Read more 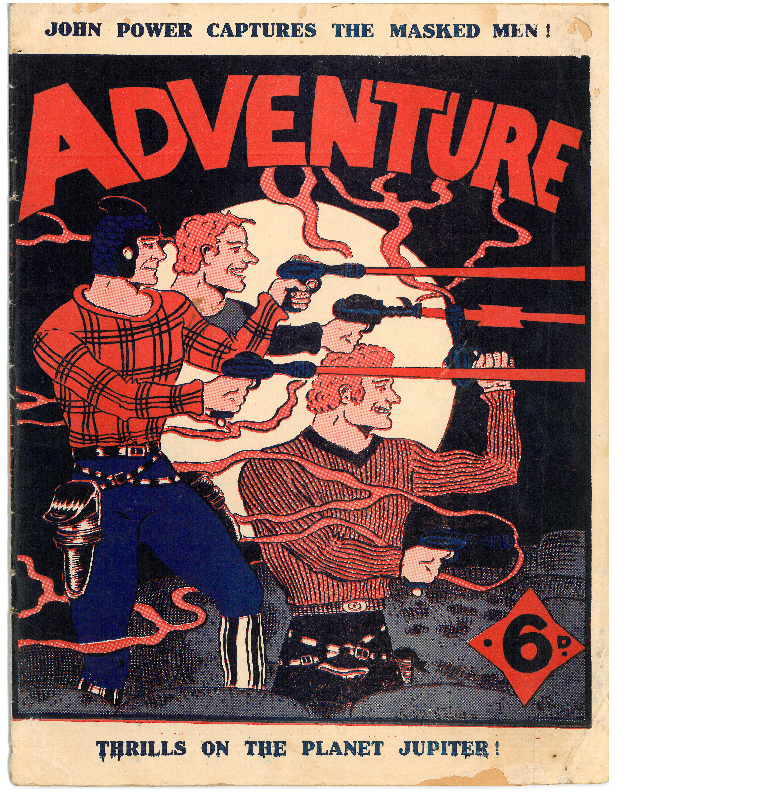 Sir George Grey Special Collections has a range of books containing cartoons and individual issues of comics. Some of the creators mentioned in Adrian Kinnaird's excellent book on New Zealand comics -  From Earth's End  -  feature in the collection. Eric Resetar was born in Auckland in 1928 and is one of New Zealand's early comic book author - illustrators. When Resetar was a child he had a great interest in science fiction and enjoyed creating his own stories with drawings. He was 13 years old when a text story he illustrated was published in the one-off production Mighty Comic .  Below is the cover of one of Resetar's self-published comics: Adventure . For the month of September there is a case displaying some of Resetar's publications in the reading room at Sir George Grey Special Collections. Ref: Eric Resetar, Adventure No. 1, 1944. Sir George Grey Special Collections. Streetwize comics  was a Christchurch Community Law Centre project and inclu
Post a Comment
Read more 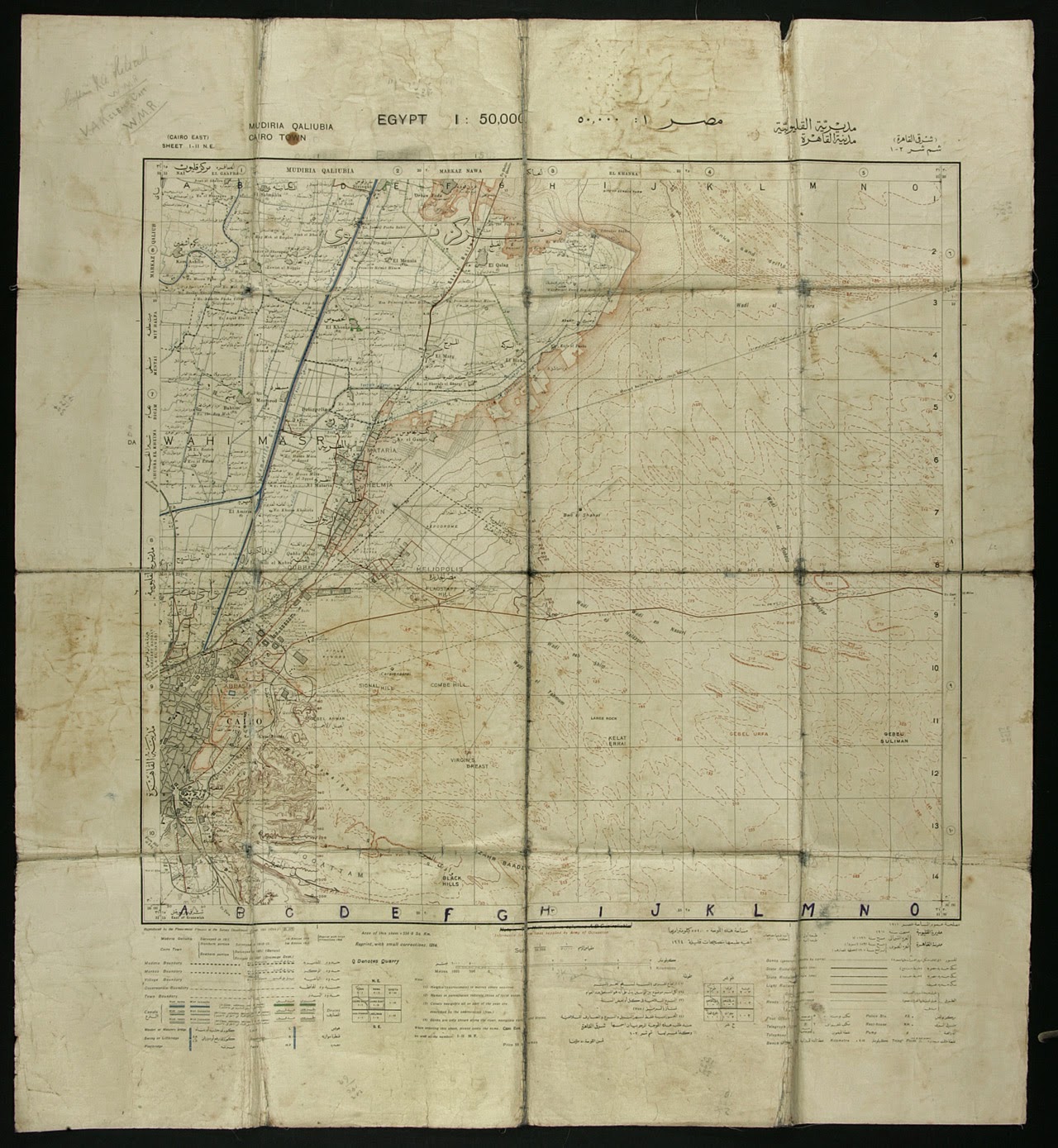 While selecting material for the exhibition ' It’ll be over by Christmas: World War 1914-1918 ', I came across a map showing  Zeitoun Camp  on the outskirts of Cairo in Egypt. This is where the New Zealand soldiers trained before being shipped off to various locations on the fronts to fight. Ref: NZ Map 8064, Sir George Grey Special Collections, Auckland Libraries
Post a Comment
Location: 44 Lorne Street, Auckland, Auckland 1010, New Zealand
Read more
More posts