Showing posts from February, 2014
Show All

The picture books of Robyn Kahukiwa

It's time to accessorise! 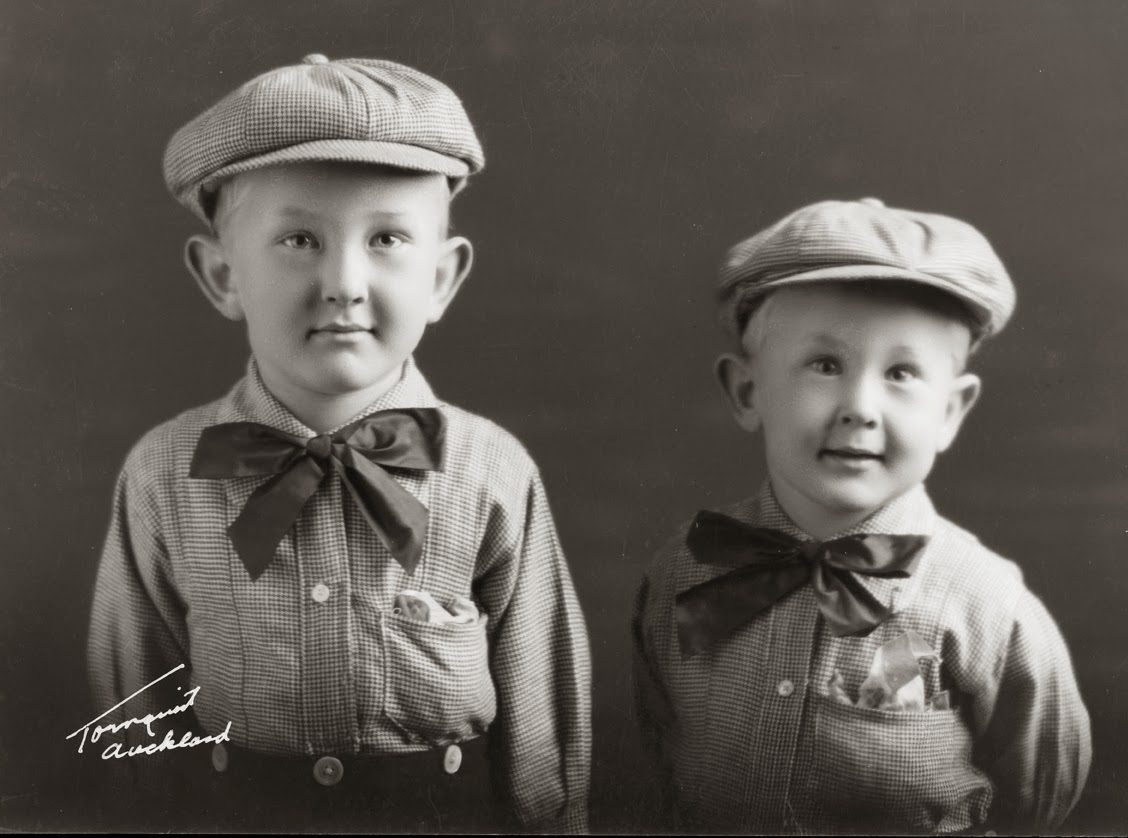 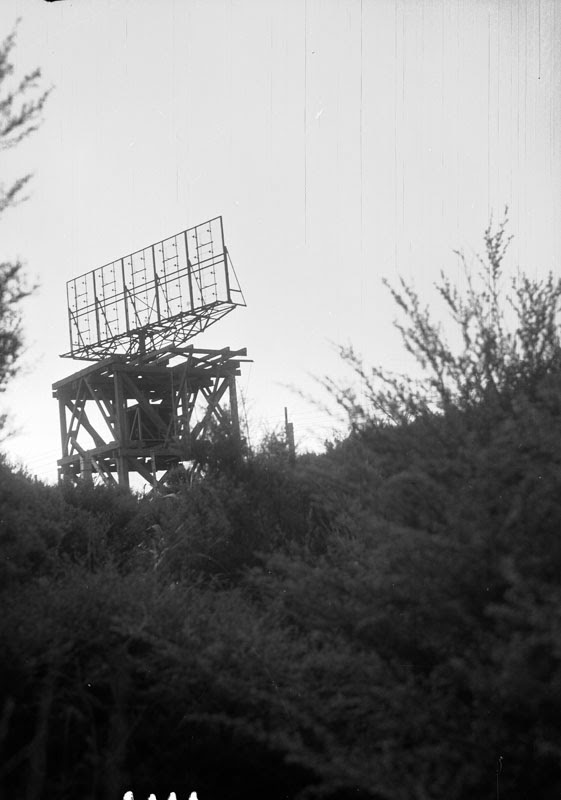 Ref: JTD-04A-01111, Piha Number 4 Radar Station antenna, 1958, West Auckland Research Centre The Piha Radar Station was constructed during WW2 by the NZ Air Force. Located at the end of Log Race Road in the Waitakere Ranges Regional Park, it was part of a network of radar stations along New Zealand's coast. The purpose of this site was to use radio wave transmission aerials and receiving equipment to detect any signs of attack from enemy aircrafts or vessels. Ref: JTD-04J-01110, Te Ahuahu Road and radar station, 1958, West Auckland Research Centre The site was closed permanently in the 1950s and the buildings and other structures removed. However, there are remains that can still be seen, including the concrete pads where the aerial tower once stood. Ref: JTD-04A-00307-1, remains at radar station site and Hikurangi beacon, 1963, West Auckland Research Centre This site has been added to the schedule of significant historic heritage places in the Proposed Auckland Uni
Post a Comment
Location: 44 Lorne Street, Auckland, 1010, New Zealand
Read more 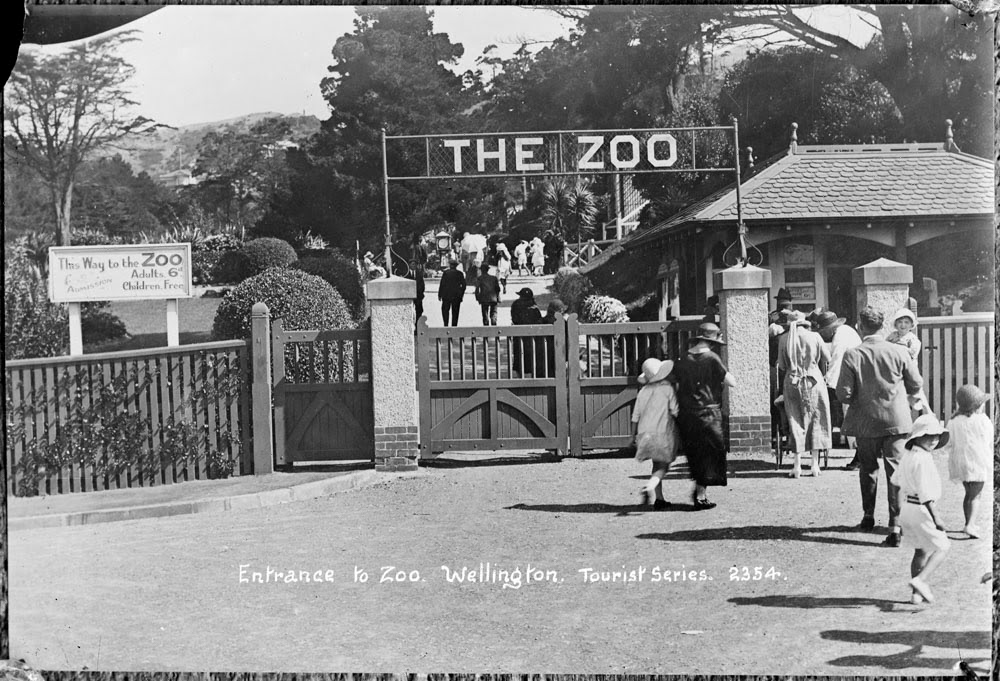 The first public zoo in NZ was opened by the Wellington City Council in 1906, near Newtown Park. The initial occupant was a solitary lion but by the mid 1920s, the zoo housed over 600 animals. The inaugral zoo in Auckland was opened by a local council again and was located at Western Springs in 1922. The animals came from John Boyd's private zoos around the country, which had recently closed down at the time. Ref: 35-R1804, entrance to Wellington Zoo. Tourist Series 2354, no date, Sir George Grey Special Collections Compared with today's standards, conditions in both zoos were pretty awful. Auckland Zoo was prone to flooding and had exceedingly tenacious rats who quickly returned whenever they were evicted - not surprisingly, since the zoo was opposite the city dump! Ref: 1-W655, looking NW from the grounds of Auckland Zoo towards Point Chevalier, 1925, Sir George Grey Special Collections Take a virtual tour around Auckland zoo through the heritage collections at Au
Post a Comment
Location: 44 Lorne Street, Auckland, 1010, New Zealand
Read more 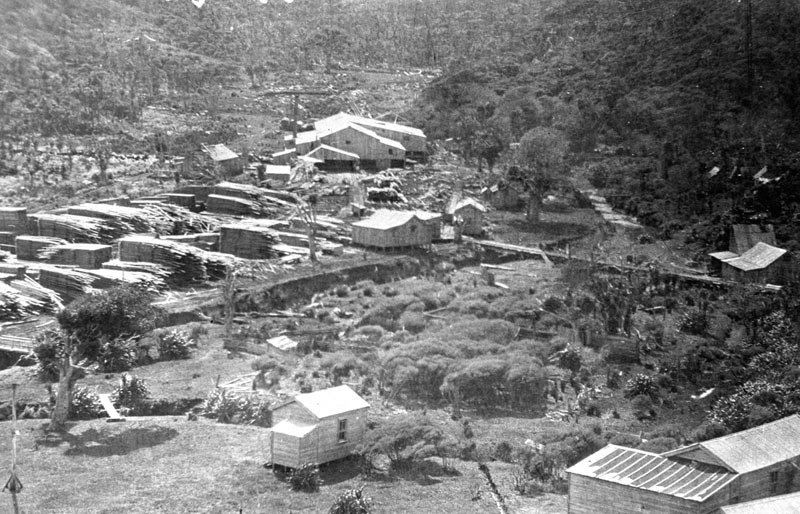 Piha Mill was operational from 1910 until 1921 and was one of the largest mills in the region before the timber industry began to decline.Although the mill was situated within the boundaries of the Waitakere Ranges Regional Park, a village grew up around it to accommodate the workers. Facilities such as mill accommodation, cookhouse, store and a school were also established. Ref: JTD-04L-02640-1, Piha Mill, 1915, West Auckland Research Centre Kauri trees were felled and transported to the mill using a combination of bullock teams, driving dams and timber chutes. After the wood had been cut, it was laboriously moved from Karekare by tramway, driven to Windy Beach by wagon and then taken by coastal tramway to Whatipu Wharf before finally being shipped out. Ironically timber from the mill was for the most part used to build railways. Ref: JTD-04C-03803, horse and truck of timber from Piha Mill, 1920, West Auckland Research Centre
Post a Comment
Location: 44 Lorne Street, Auckland, 1010, New Zealand
Read more 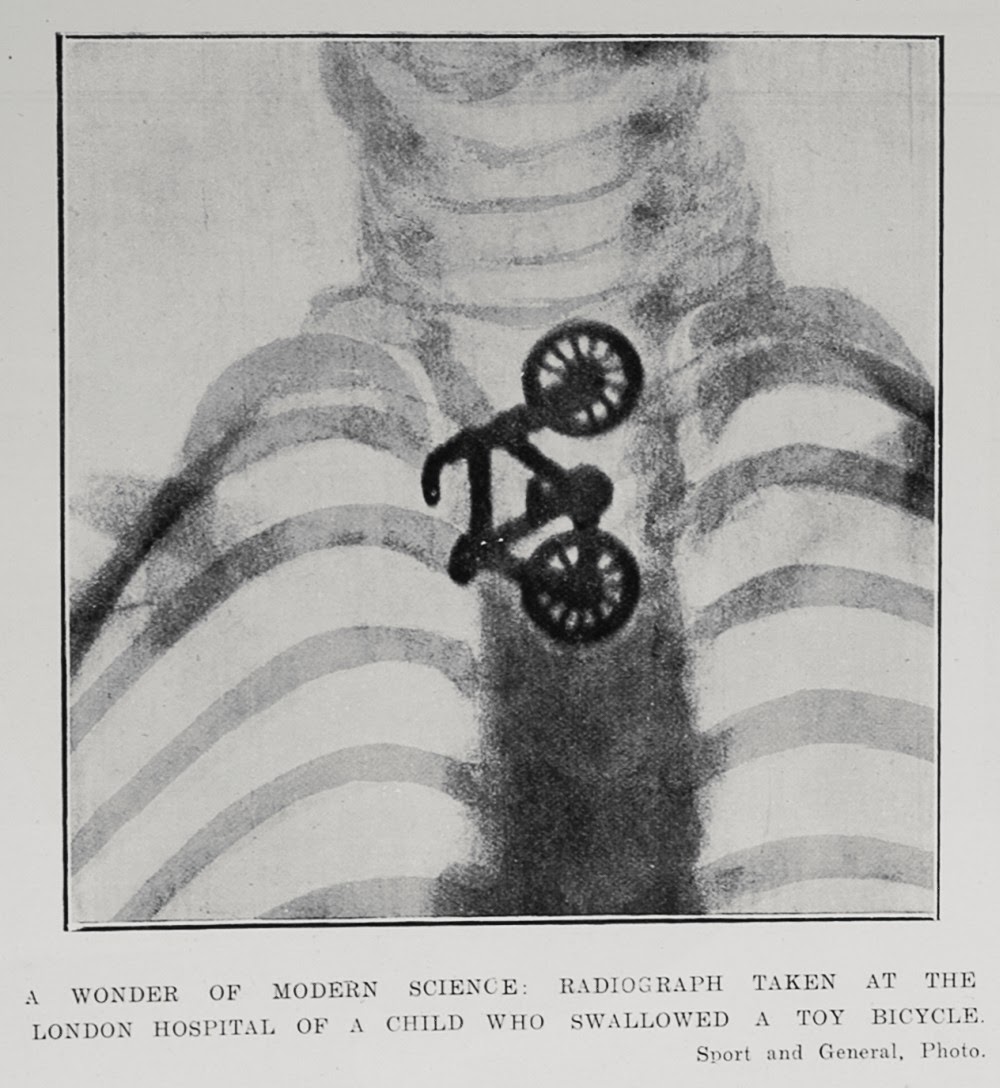 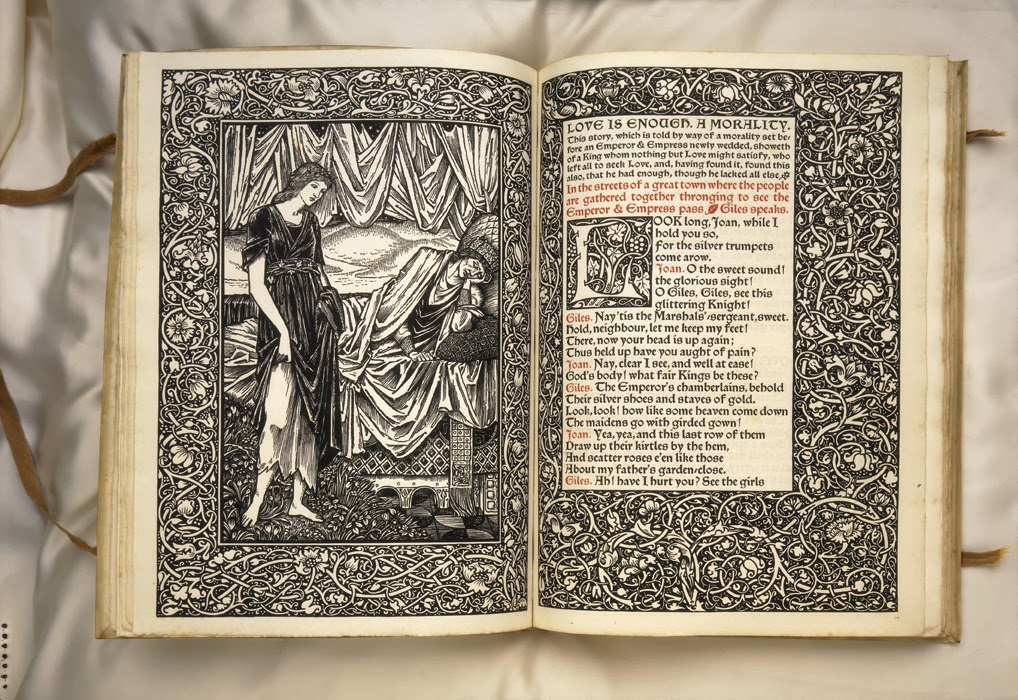 Love is in the air ... and Valentine's Day is upon us. To get you in the mood, here is a selection of love themed images from the heritage collections at Auckland Libraries. Poetry: Ref: 7-C1916, William Morris, 'Love is enough', 1898, Sir George Grey Special Collections Love letters: Ref: AWNS-19080430-4-5, the love letter, 1908, Sir George Grey Special Collections
Post a Comment
Location: 44 Lorne Street, Auckland, 1010, New Zealand
Read more 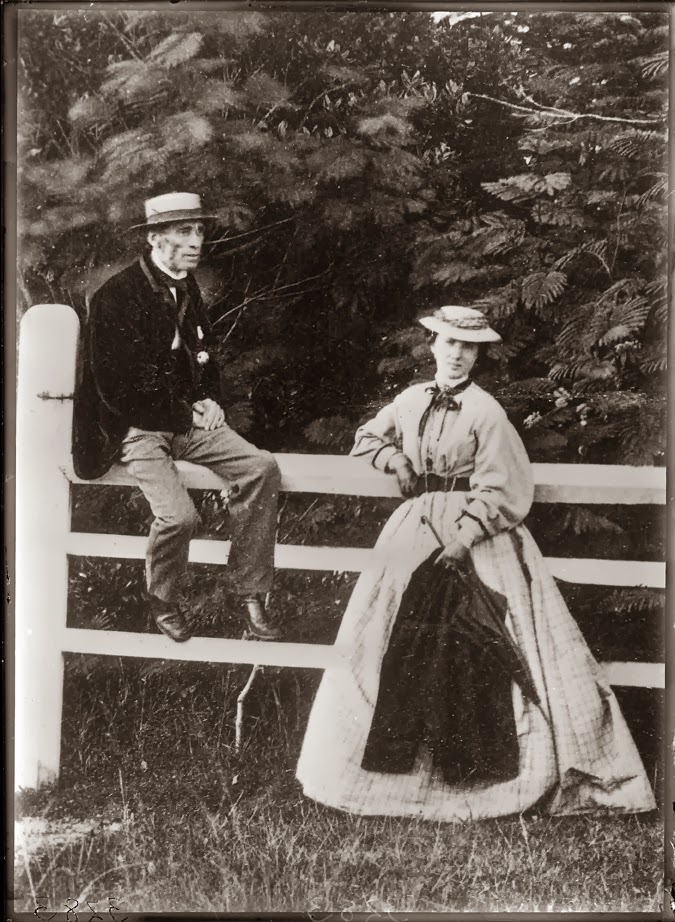 The latest blog post from Walter Cook at the advent of his retirement from The National Library of New Zealand Te Puna Mātauranga O Aotearoa is a fascinating read. He divulges the 'tricks of the trade' used to date photographs. I was so interested in this idea, that I decided to test out his 'taxonomy of fashion', which is based on women's fashion and hairstyle trends of the day. I used these dated headings as a framework to search for complementary photos in the Sir George Grey Special Collections, using the Auckland Libraries Heritage Images database. You can see from what I found below, that it was quite a success! In a few cases where we don't know the exact date the photograph was taken, the taxonomy can be used as another tool in helping us to pin this down the date to a narrower time period. So enjoy and thanks to the National Library for the inspiration and what turned out to be a very fun exercise! The full crinoline, 1856 to 1865. Characterised
Post a Comment
Location: 44 Lorne Street, Auckland, 1010, New Zealand
Read more 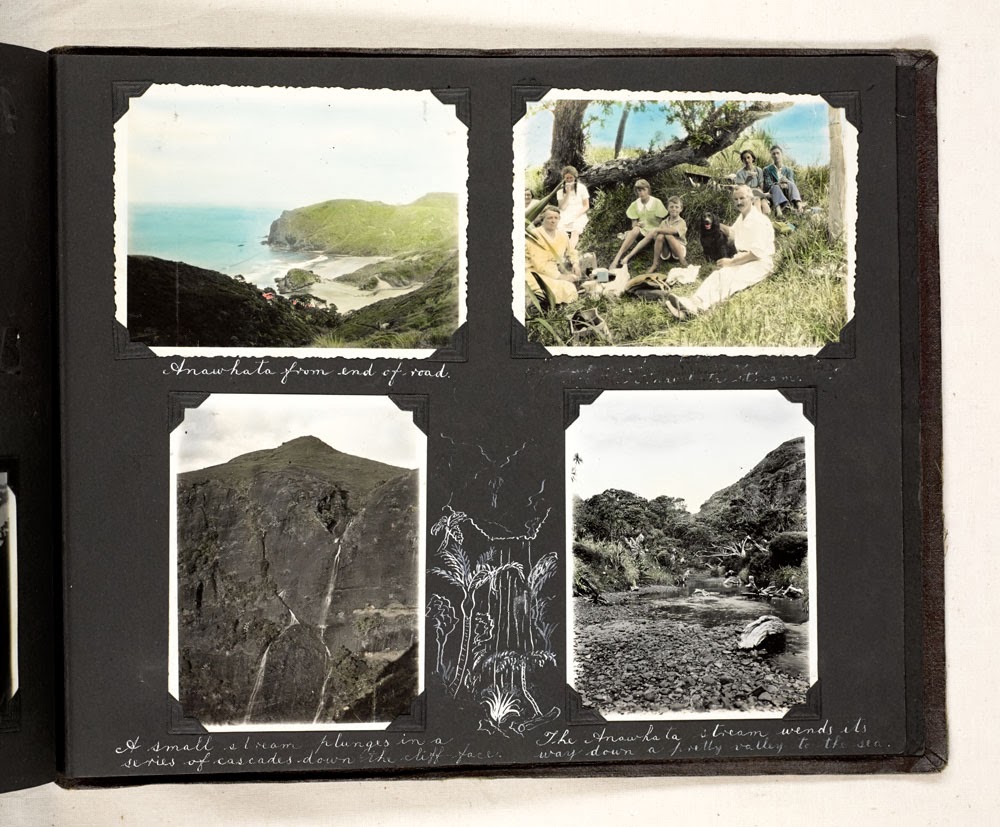 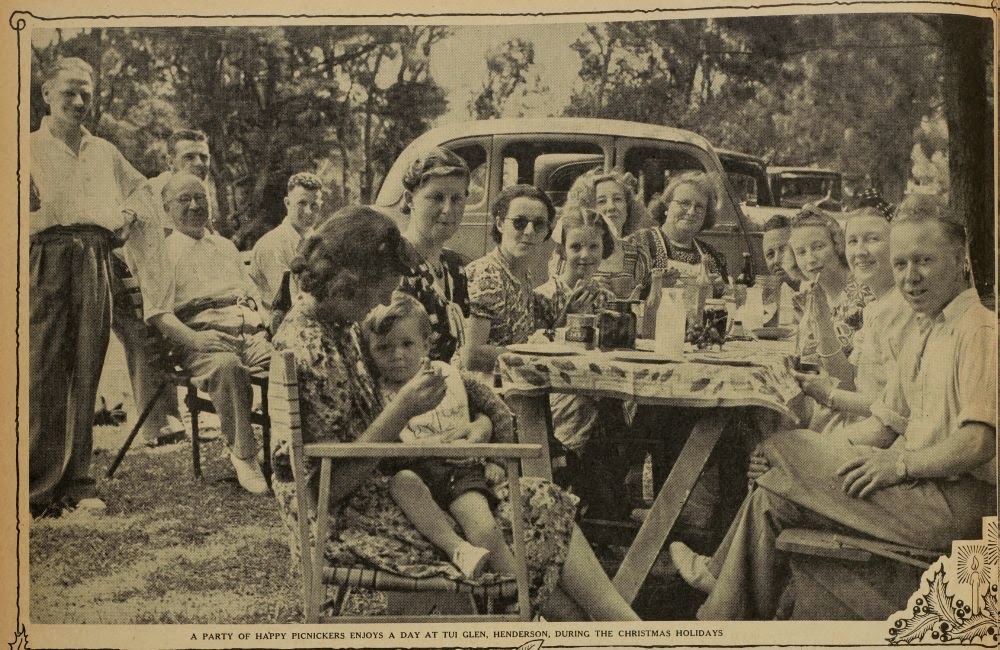 Tui Glen, a 7 acre scenic spot in Henderson by the Oratia Stream, was landscaped and planted by the Brookes for their family summer holidays. Given its close distance to Auckland, the Brookes quickly realised that Tui Glen would be an attractive destination for picnickers and campers. Ref: AWNS-19431215-24-1, party of picknickers enjoy a day at Tui Glen, 1943, Sir George Grey Special Collections Tui Glen was NZ's first registered motor camp. When it opened in the 1920s, only guests who had come by car or motorbike could be accommodated. Ref: FMO-0729-00028-G, Tui Glen day-trippers, c. 1930s, West Auckland Research Centre The camp ground had modified ships cabins, which people could rent. This how the term 'cabins', which is used to refer to holiday park accommodation, supposedly came about. Other cottages were built during the 1920s to 1960s. Ref: FMO-0729-00008-G, Tui Glen showing cars and people, c. 1930s, West Auckland Research Centre As well as being
Post a Comment
Location: 44 Lorne Street, Auckland, 1010, New Zealand
Read more

The mills at Riverhead 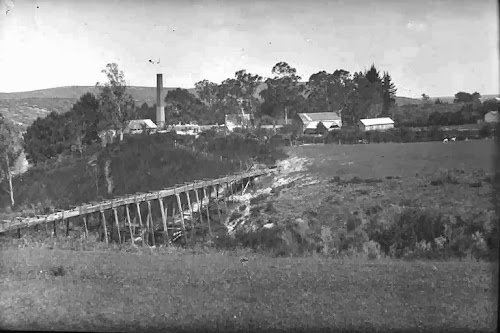 Located on the western banks of the Ranitopuni River, below the Riverhead Bridge, is an old mill site. Initially a timber mill, the mill was powered by water (1845-1856). Subsequently, the Waitemata Flour Mill was built on the same site in 1855/1856 and was operated by J. Brigham (until 1859). J. Lamb took over the site after Brigham and ran it until around 1888. The mill was vacant for 2 years before the Riverhead Paper Mill opened and ran until its closure in 1923. Ref: 80-BIN247, John Lamb's Waitemata Mills at Riverhead, c. 1900, Sir George Grey Special Collections The paper mill company that took over the site had examined several old flour mill sites before choosing the former Lambs Mill. The site was particularly attractive because of the plentiful freshwater supply and access to cheap harbour transport. Before opening, the mill under went major reconstruction. It was entirely steam powered, with coal brought up the harbour and unloaded at a special wharf at the site. T
Post a Comment
Location: 44 Lorne Street, Auckland, 1010, New Zealand
Read more 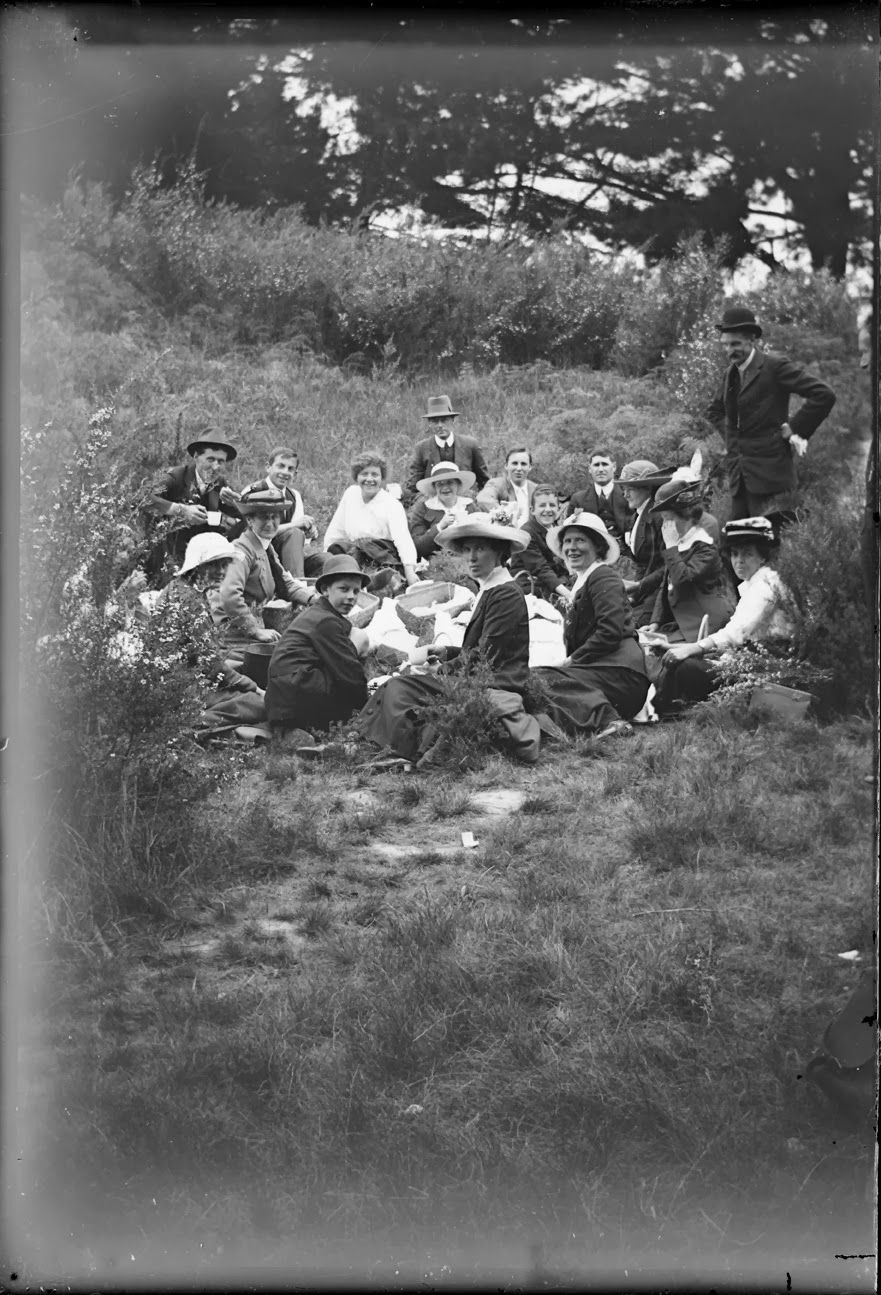 Ah summer .. long days of sunshine, trips to the beach and of course, the all important picnic. Summer wouldn't be summer without at least a few picnics. Despite the sand in your food and the insects buzzing around, eating food outside never fails to bring a sense of excitement to a meal. From simple sandwiches to grand affairs, picnics are always popular with everyone, whatever their age. Ref: 4-7028, group picnic, no date, Sir George Grey Special Collections Take a look through these heritage images from the Auckland Libraries collections and see how people went picknicking in the past!
Post a Comment
Location: 44 Lorne Street, Auckland, 1010, New Zealand
Read more
More posts