Showing posts from August, 2012
Show All

By NB - August 23, 2012
The British Armorial Bindings Database  is now available online. This free database allows users to identify heraldic stamps used by owners to decorate their books. It has been published under sponsorship by The Bibliographical Society in conjunction with the University of Toronto.

Users can search for book owners using their family name, titular name, rank in the peerage, and by gender.  Around 12,000 books from around the world form the basis of this database. The database has great application for rare book librarians, book historians, book dealers, students of heraldry, genealogists, and coats of arms enthusiasts.
﻿

By NB - August 16, 2012
Today marks the 125th anniversary of the death of Julius von Haast (1822-1887). German born geologists Haast and Ferdinand Hochstetter (1829-1884) were responsible for much of the early geological surveying in the South Island, particularly around the Canterbury region.

Haast had a number of of flora and fauna and landscape features named after him including: Haastia (an alpine plant), the extinct Haast's Eagle (the largest eagle to have ever lived), the Haast River and the Haast Pass.

Find out more about Haast and his written works. Auckland Libraries heritage holdings include letters from Haast to Sir George and maps as seen below (in both instances enter the search term 'Haast' into the databases) in the Sir George Grey Special Collections at Central City Library. ﻿﻿﻿﻿ ﻿﻿ ﻿﻿﻿﻿﻿﻿﻿ ﻿ ﻿﻿﻿﻿﻿﻿﻿﻿

By NB - August 06, 2012
A library just isn’t a library without displays and with our collections, we are spoilt for choice in the display material available to us.

We decided to put together a display for the Central Auckland Research Centre on the women’s magazines in the collection because they are just such a fascinating part of our 20th century heritage – the 1970’s especially.  It was tough deciding which magazines to select and also which individual issues to highlight. With all those unique seventies designs, the adverts and the products, the fashion, the makeup, the grittiness of topics and issues…. there was so much to choose from.

In the end, we went with 'Broadsheet' and 'Eve', two different magazines from the period. The research centre has bound collections of both these, and other magazines, on the open shelves.

'Broadsheet' (1972 to 1997) was run by a collective of the Auckland Women’s Liberation movement and dealt with the real gritty issues affecting women. Things lik…
1 comment
Read more

The Walker family of gravediggers 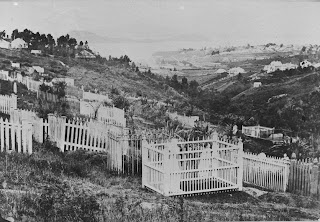 ﻿﻿﻿﻿﻿﻿﻿A recent article in the Western Leader describes the history of the Walker family, who were employed as gravediggers at Symonds Street Cemetery and Waikumete Cemetery over a period spanning from the mid 1840s through to early 1900s. Find out more.﻿﻿