Showing posts from May, 2013
Show All

By NB - May 29, 2013
Talofa lava, Samoan Language Week is being celebrated each year to acknowledge Samoan Independence Day. It is a time to recognise, support and help maintain the Samoan language and its use in New Zealand.

The Poll Tax in New Zealand

By NB - May 27, 2013
I became curious about the poll tax when a customer requested a book by Nigel Murphy called 'The Poll Tax in New Zealand' (1994). The research and writing of this book was commissioned by the New Zealand Chinese Association. The book highlights the NZ government's involvement in discrimination against Chinese settlers and the hardships they suffered as a result of the steep poll tax they had to pay when moving to NZ (see post on 19 March 2013)..

The NZ government introduced the poll tax in 1881. Under the Chinese Immigrants Act only Chinese immigrants had to pay the poll tax. The tax was a response to anti-Chinese attitudes in European settler society after an economic slump and increasing competition for jobs.

International Day for Monuments & Sites and the Matakana Island school

By NB - May 22, 2013
International Day for Monuments & Sites is a World Heritage Day that highlights and celebrates the different aspects of heritage. It is organised by the International Council on Monuments and Sites (ICOMOS).

The day was celebrated on 18 April and the theme this year was 'The Heritage of Education'. This was something which the New Zealand Historic Places Trust (NZHPT) felt that the Matakana Island community in the Bay of Plenty had a lot to celebrate. Te Kotukutuku School House on the island is one of the few surviving pre 1900 Native school houses in NZ. The building has been recently registered as a Historic Place Category 1 and was built on land donated by local iwi.

By NB - May 17, 2013
Papers Past contains the digitised content from key New Zealand newspapers and periodicals. It's a veritable treasure trove!

Overall content in Papers Past covers the years from 1839 to 1945 and includes 77 publications from all regions of New Zealand. And all of this content is fully searchable using a basic keyword search or a more advanced search option, which allows you to narrow your search down using dates and content type (e.g. articles, adverts).

Papers Past have recently added 40 years worth of the New Zealand Herald, covering the period from 1885 to1924. Content on the system starts in 1863, when the paper was established. Previous installments of digitised content, (as mentioned in blog post on 8 August 2013), took the reader up to 1864, so it is great to have to have the start of the 20th century added. 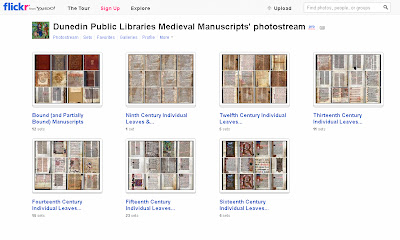 Dunedin City Library's have put images of their  medieval manuscripts from the Alfred and Isabel Reed Collection onto Flickr. The old way of getting the word out meets the new! Find out more about this project.
The images include a selection from each bound manuscript, and the front and back (or recto/verso if you want to use the fancy terminology) of each individual leaf and fragment. Images are divided into collections and sets.

The site was created to promote and provide virtual access to one of New Zealand's largest collections of medieval manuscripts. One of the collection highlights includes a leaf and bifolium from a 9th century Bible in Carolingian script (RMMF 1a and 1b), which are among the oldest manuscript leaves in the country. 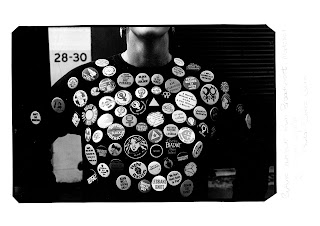 The Sir George Grey Special Collections at the Central City Library holds the archive of Broadsheet magazine as well as copies of  items such as the magazine, letters, posters, Broadsheet was a feminist magazine focusing on women's issues, publishedin New Zealand between 1973-1997.

On display in the reading room cabinet at the moment, is a selection of photographs from the recently acquired photographic print archive of the magazine. The display includes images of protest events, notably by New Zealand women, and of the interior of an early incarnation of the Broadsheet bookshop. This bookshop eventually became 'The Women's Bookshop' which is now located on Ponsonby Road.

By NB - May 10, 2013
Margaret Pollock found the tattered blue diary of her late father Laurence after his death in 1989 in amongst newspaper clippings and prisoner of war artifacts. The diary details Laurence's time in German, Polish and Italian POW camps during the second World War. Laurence  was serving in the 20th Battalion, 2nd New Zealand Expeditionary Forces in North Africa when he was captured by German forces. He risked his life to record the horrific and harrowing conditions inside the camps.