The most substantial monograph on bookplates in New Zealand is In another dimension by Ian Thwaites. He describes bookplates, or Ex Libris, as labels which are inserted into books to establish their ownership. He adds that “they are attractive items which often reflect in a unique way the personalities and interests of both owner and artist (p.9).”

In the preface of this book John Stacpoole states, “A bookplate helps to establish the provenance of a book, sometimes adding to its value, but always making a link between past and present owners whose hands have held it. It is a reminder that the owner is – or was – a real person, often the person to whom the book must be returned (p.5).” 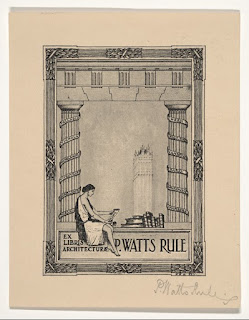 It remains the only active bookplate organisation in the country, and has held meetings regularly since 1930 except for a gap between July 1943 and August 1946. This year marks 85 years of existence for the Auckland Ex Libris Society.

The 1920s-1940s was when bookplates were fashionable in this country. Hilda Wiseman was the most influential figure in the New Zealand bookplate movement and in addition to her own output, she encouraged other bookplate designers and collectors.

From the inaugural meeting of the Auckland Branch of the New Zealand Ex Libris Society on 27 November 1930, Hilda Wiseman was its mainspring. With only very few interruptions for illness, she was Honorary Secretary from 1930 until 1967 (Thwaites p.83).

However it is her achievement as a bookplate designer which is outstanding (Thwaites, p.84).

In 1979 her collection of several hundred plates was presented to, what was then, the Auckland Public Library. The collection in the library includes bookplates that belonged to some famous and also some rather infamous individuals including: Captain James Cook, Vladimir Ilyich Lenin, Adolf Hitler and George Washington.

Auckland Libraries also holds Wiseman’s artistic papers as part of our New Zealand Manuscripts collection, which includes original ink sketches for her bookplates as well as some paintings and her easel.

In an essay entitled “A lifetime of bookplates: the achievement of Hilda Wiseman” included in In another dimension, Thwaites states that:

“It would be difficult to argue with the statement that Auckland artist Hilda Wiseman was one of the dominant figures in the history of the New Zealand bookplate movement. Indeed her contribution helped in no small way to ensure that bookplates remained part of the Auckland art world even after their popularity had declined after the 1940s (p.81).” 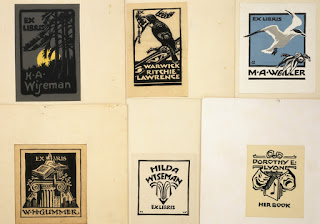 This image is showing six bookplates created by Hilda Wiseman for herself, for Auckland architect William Henry Gummer, for bird-lover M. A. Waller, Warwick Ritchie Lawrence and for Dorothy Lyon, a long-serving and much-loved member of the Library’s staff.