By AkL - January 22, 2016
100 years ago this Sunday, 24 January, the Featherston Military Training Camp officially opened its doors to men from around the country.

As part of our ongoing commitment to the New Zealand’s First World War centenary commemorations Auckland Libraries have recently a digitised a small but important resource for understanding life in New Zealand during the First World War, specifically life in the Featherston Camp.

In and around Featherston Camp  by Sir Alfred Hamish Reed is a small volume written in a calligraphic hand with medieval-style ornate initials and illustrated with photos pasted on. 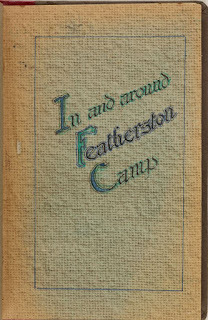 
In 2007 to commemorate 100 years, Reed Books published a reproduction of a similar book that AH Reed made for his wife Isabel about his time in Featherston Camp and his walks that he took whilst  on leave from the Camp. First Walks in New Zealand, thought to be Reed’s first book, is mostly made of an account of Reed’s walk from Ohakune to Pipiriki during his Easter leave in 1917.

It does include an account of the 24th Reinforcements’ ‘Long Trail over the hill’ to Trentham. In his autobiography Reed talks about the regret he felt at not being able to accompany his 21st Reinforcements on their walk from the Camp to Trentham. 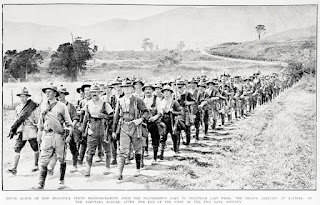 In and around Featherston Camp is much smaller (20 pages) and much more focussed on life in the camp but also describes the surrounds of the camp including the Tauherenikau River.

Intriguingly it includes this photograph of the 22nd Reinforcement marching into the camp, which could suggest that this was in fact the first book by AH Reed. 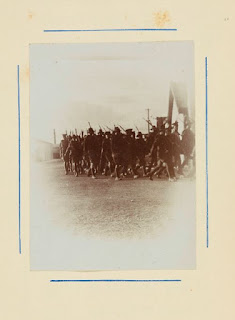 Reed was in the New Zealand Expeditionary Force from 22 September 1916 to 16 October 1918. He writes in his autobiography, “I was posted to the 21st Reinforcements, the last of those manned solely by voluntary enlistment (p.138).”

Reed spent his time in the NZEF in Trentham and Featherston military camps where his shorthand skills gained him a position on headquarters staff.

“During spare time I did quite a lot of lettering for various purposes in the camp. On one occasion I did a show card for the Camp Record, an illustrated booklet descriptive of the camp, the profits of which were devoted to the erection of a memorial to those who died in the camp (An Autobiography, p.166).”

The article Reed contributed to the Camp Record, is entitled ‘A day and a night with the main guard: duties of the camp sentries’ which he describes as ‘the most honourable of the camp duties’.

First Walks in New Zealand and this publication also include photographs and descriptions of the sentries. 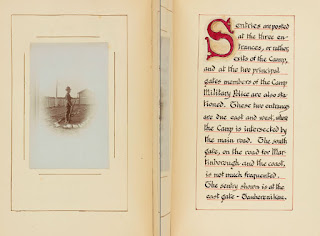 Reed gifted this early work to Hector Bolitho, who was the editor of Featherston camp weekly, the camp newspaper, which Reed also contributed to. Bolitho then presented it to Auckland Libraries in 1934.