By Joanne - January 27, 2015
The Dick Smith NRL Auckland Nines tournament takes place this weekend at that most hallowed of sports grounds, Eden Park. (Go the Warriors, just quietly!) Last year was the inaugural tournament and in the lead-up, I took a nostalgic look back, via our family history blog Kintalk, at the old league ground, Carlaw Park. Now, we're skipping across town to the tournie venue itself - the stadium where that girl-and-boy-crush Richie McCaw held the Webb Ellis trophy aloft at the Rugby World Cup Final in 2011 - Eden Park.

The park began as a cricket ground in 1903, and was due to the vision of one Harry Ryan, a cricket enthusiast who approached landowner John Walters to lease part of his land as a sports field.  In the book  Eden Park: A History, the authors write, "Certainly the rough paddock strewn with stones, studded with outcrops of rock and streaked with cowpats, falling away to a boggy trough that filled in a downpour and remained flooded throughout the winter, looked better suited to frog-hunting or duck-shooting than cricket, let alone rugby. Ryan knew or at least imagined better." That bit of land was in fact located just up the road from Cabbage Tree Swamp, now Gribblehirst Park.


Interestingly, those who saw Ryan's vision as madness most likely felt vindicated when, in 1907, massive downpours of rain saw the ground submerged  in water for a week. The same thing happened again later in the year. Drainage problems were a scourge even as late as 1975 when severe rain before the one-off test between the All Blacks and Scotland saw the event close to being called off with the drainage system unable to cope with the flooding.

In 1913 the park was leased to the Auckland Rugby Union so it became both a summer and winter sporting venue, and in 1921 hosted the first international event, a NZ v South Africa Test. 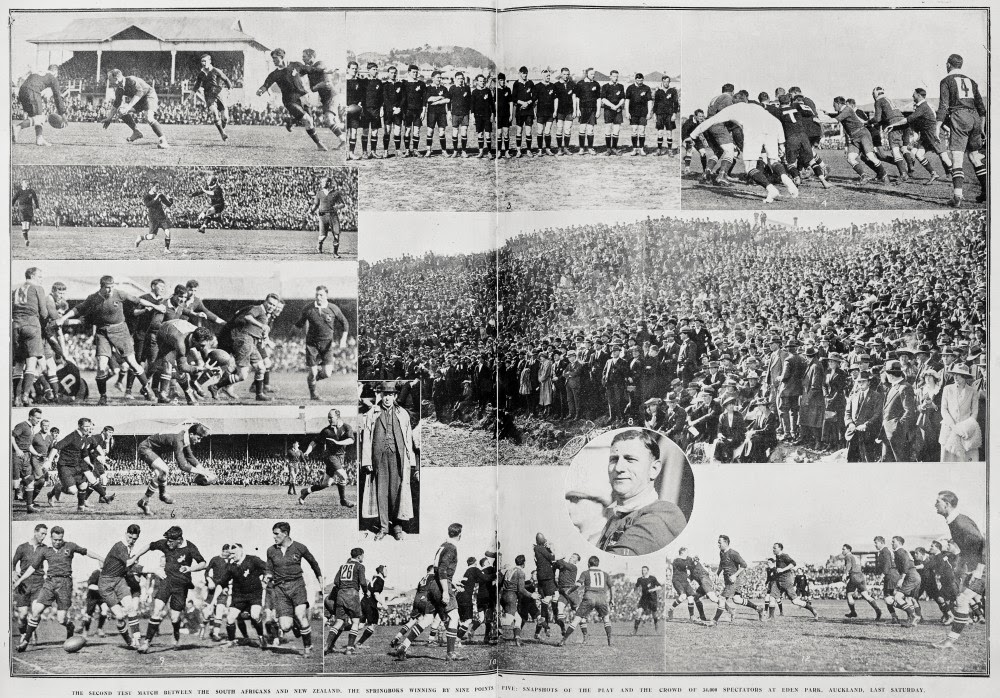 The Western part of the ground was just open space until 1950 when a temporary stand was erected for the British  Empire Games. In 1956 a permanent stand was built, but subsequently moved to North Harbour Stadium.

Eden Park has hosted events over the years from the 1950 Empire Games, the Queen Mother’s visit in 1966, the infamous flour bombing test at the NZ v South Africa rugby game, to the Dalai Lama visit in 2002. And of course in more recent history, it has been the subject of the hotly debated dilemma leading up to the 2011 Rugby World Cup - should the event be hosted at historical Eden Park or a nice new waterfront stadium.

This weekend sixteen NRL teams and thousands of league and sports fans from New Zealand and Australia will converge on Eden Park for two days of footie and fun. If you're lucky enough to go - have a blast, and may your team win!
But a reminder that sports fans are in for even more fun a few weeks later with the Cricket World Cup taking place here in New Zealand and across the ditch in Australia. (Go, the Black Caps!) Eden Park will host several games - including the semi-final.