By Admin - August 31, 2018
Over 125 years ago thousands of women in Aotearoa New Zealand took action by signing the 1893 Suffrage Petition, adding their individual voices to a collective call for political representation. In 2018 the Central City Library held a Heritage Collections exhibition called Wāhine Take Action, timed to coincide with Suffrage 125 celebrations across Aotearoa.


The exhibition took a broad view of what ‘taking action’ means, looking at the many different ways women have worked for social change or to support their communities. Some actions are taken individually, while others are part of larger movements. Some are explicitly feminist, some are not. All demonstrate the leadership of women in cultural, social, and political life in Aotearoa.

Featured content included unique photographs, posters and letters from our manuscript collections, rare books and heritage magazines, and women’s voice from the oral history and sound archive. Thanks to the support of  Ngā Taonga Sound and Vision, and courtesy of Umbrella Films, the exhibition also featured Women on the Move, a 26 minute documentary about the 1983 International Women's Day for Nuclear Disarmament.

In the 1970s and 80s women inspired by the second wave of feminism took action to respond to other women’s needs, creating support services that still exist today. Many of these originated out of women’s centres.


This poster advertises a celebration of the first anniversary of the Auckland Women's Centre. The centre opened in its first location at 125 Ponsonby Road in 1975, calling itself “a feminist centre for all women”. Groups that operated there included Rape Crisis, the Women’s National Abortion Action Campaign (WONAAC), and one of the first women’s refuge organisations, Auckland Halfway House.

Women’s independent publishing flourished in the 1970s and 80s. Women circulated newsletters to spread ideas and share information, started magazines to debate issues and celebrate new ways of living, and published books to educate and inspire others.

The Auckland Women’s Centre was a focal point for lesbian life in the city. By the early 1990s it held a substantial archive, including a large collection of lesbian magazines and newsletters which were donated to Auckland Libraries in 2001 and catalogued with the aid of the Auckland Library Heritage Trust.


"We had a library of lesbian books because you couldn’t get them at the library – lesbian love stories, that sort of thing, and women would lend copies to other women because they were so hard to get."

Jan Tan, quoted in Margie Thomson’s A proud herstory: a celebration of the Auckland Women’s Centre 1975-2010.

The effects of colonisation led to high profile protest movements which were often led by strong Māori women.

In 1993 Māori women lodged a claim to the Waitangi Tribunal that has become known as the Mana Wāhine Claim. The claim alleges that the Crown’s actions and policies have discriminated against Māori women and failed to meet its obligations under the Treaty of Waitangi to protect and ensure rangatiratanga of Māori women.

Rosettes and sashes, badges and banners, placards and and poster are all ways to express solidarity, to take a stand and be visible. Graffiti painted on walls or billboards brings a feminist message into the public domain. Some of these photographs show words added to advertising billboards in order to counter messages considered sexist or patronising to women.

Crafts like weaving, sewing, quilting, and basket-making have traditionally been associated with the domestic sphere and women. This photograph shows Faithlyn Palalagi watching Mana Palalagi weave at a Niuean handicrafts group in Ōtāhuhu.

Letter writing campaigns can be an effective protest action, as well as a means of securing support. Amey Daldy became president of the Auckland branch of the Women's Franchise League in 1892 and was a driving force behind the suffrage campaign in Auckland. She wrote this letter to Sir George Grey the day after New Zealand became the first self-governing nation in the world to give women the right to vote. In the letter, Amey Daldy expresses gratitude for Grey’s sympathy towards their cause and invites him to attend a meeting to celebrate the victory. 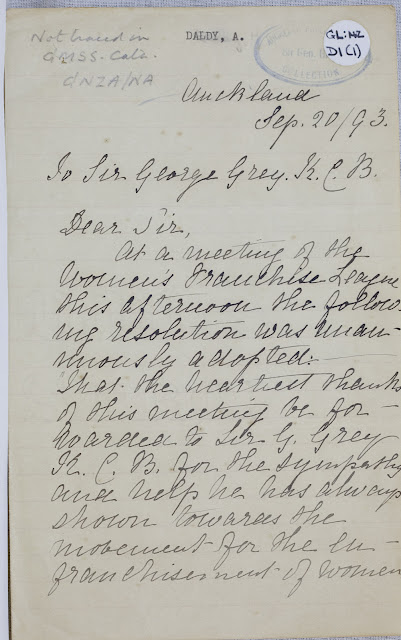 In turn, Amey Daldy supported Sir George Grey in his own political campaign for the seat of Auckland City in the November 1893 election. She acted as chairperson at Grey's political address on 23 November, and it was at this meeting that she delivered her famous speech urging women to use their new voting privileges, reassuring them that women would be in attendance at polling booths and could look after any babies that voting women might bring with them. In her words: "Let not babies, the wash-tub, or even dinners prevent women going" (POLITICAL ADDRESSES., New Zealand Herald, Volume XXX, Issue 9365, 23 November 1893 and AUCKLAND CITY ELECTORATE., Auckland Star, Volume XXIV, Issue 278, 23 November 1893).