Stepping back into the shed: Westfield Freezing Works, 1916-1989

By Admin - November 23, 2019
"Westfield workers turned a place which was often physically strenuous, monotonous, hot, cold, bloody and smelly work, into a workplace of whānau, camaraderie and whanaungatanga."

For many workers in the meatworks industry one of the main things they enjoyed is the sense of working as part of a large family. This was very much the case at the four large meatworks in the Westfield area of Auckland, R. & W. Hellaby, AFFCO (Southdown), Auckland City Abattoirs and Westfield Freezing Company. Eunice Te Rangiuaia refers to this in her interview about her time working in the cannery at Westfield Freezing Company.


With the concurrent closures of the other meatworks and local manufacturing industries during the late 1970s and 1980s the landscape now gives no clues to the industry which employed over 5000 workers at the peak of the season. With the exception of the Auckland Meat Processors, which still operates on the former Auckland City Abattoir site, most other evidence of this huge industry has disappeared.

One remaining, is this sculpture with two plaques on the corner of Vestry Drive and Great South Road, Ōtāhuhu. 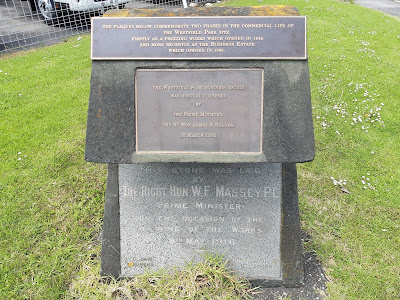 Another reminder of this industry is the Westfield Freezing Company archive donated by Michael Sanders in 2014. Michael Sanders, former General Manager at Westfield Freezing Company – rescued their business archive from site just before demolition. He donated the archive to Auckland Libraries in 2014.  It contains business registers, ephemera, and objects such as advertising signs, with photographic material making up the bulk. As such, it lent itself to being displayed as a photographic exhibition, with the voices of the community providing context and heart.

The description of the area by Rae Rankin helps us to envisage what the area used to look like in the 1940s.

Listen to the track here

Former Southdown work Max Beesley describes the all important Ōtāhuhu Railway yards, where the stock arrived from farms, and were taken into the respective works.

Former Labour Prime Minister and Ōtāhuhu local, David Lange paints a picture of the neighbourhood where he grew up. He worked at the Westfield Freezing Company as a student.

The meatworks formed the backbone of employment for workers from neighbouring suburbs. It also was a key employer of Māori who moved to Auckland for work during the ‘urban drift’ in the 1930s, 1950s and 1960s.

People from Britain, Europe and throughout the Pacific migrated to Aotearoa and many settled in Auckland and took up employment in the industry.


Bill Daniels - The beef chain and the fellmongery

Lots of people worked at Westfield Freezing Works as students during the summer holidays. Bill Daniels has some tales to tell.

And we cannot finish without the mention of the important role that the unions played in the industry.


The exhibition acknowledged the placemaking legacy of Westfield in Auckland through social and industrial histories. Thanks to the Māngere Ōtāhuhu Local Board and the staff at the Māngere Arts Centre - Ngā Tohu o Uenuku, the exhibition was held in the south, where this history was made.