Back in 1989 and 1990 the Auckland Public Library commissioned two projects to mark the national sesquicentenary a.k.a. 150 years since 1840 when Te Tiriti o Waitangi was signed and recognised as our founding document. This documentary initiative was named 'The 1990 Project', and aimed to record the look and feel of Auckland through oral history and documentary photography.

The oral histories focus on eastern suburbs, Glen Innes, and Panmure and were recorded from 1989 through to 1992. Originally recorded on cassette, these interviews have been digitised and are described on Kura Heritage Collections Online. Some of the audio is online: you can hear the Rev Leiite Setefano talk about travelling from Samoa to Wellington, and Aneta Jean Hart's account of moving from rural Taranaki to Auckland. In a HeritageTalk recorded during lockdown in April 2020 Megan Hutching used the interviews to describe the development of Glen Innes after the Second World War.

Now the photographs are going online too. The documentary photographers travelled more widely across suburbs and into the CBD. The photographs are worth a thousand words. You can time travel and see the changes in Auckland over a generation.

Meet the 1990 Photographic Project photographers, from left to right: Stuart Page, Chris Matthews, Ans Westra, Miles Hargest and Paul McCredie standing in the central median of Queen Street between the Kerridge Odeon Theatre Centre (left) and the Civic Theatre (right). This was a talented group of photographers even back in 1990. Now their work is interesting for both the changed place they have documented and the unique eye they each brought to the task.

The 1990 Project delivered over 6,000 negatives in total and these are being digitised for Kura Heritage Collections Online. We knew the photographs were going to be interesting back then. The photographic project featured as an exhibition ‘Pictures from the Big A’ soon after the images were captured and the project was described in Archifacts, the journal of the Archives and Records Association of NZ (October 1990 pages 7-16).
Stuart Page's photographs are the first of the team of five documentary photographers commissioned to capture Auckland in 1990. Search under ‘1990 project’ and more than 1,000 photographs from 1989 – 1990 will appear. 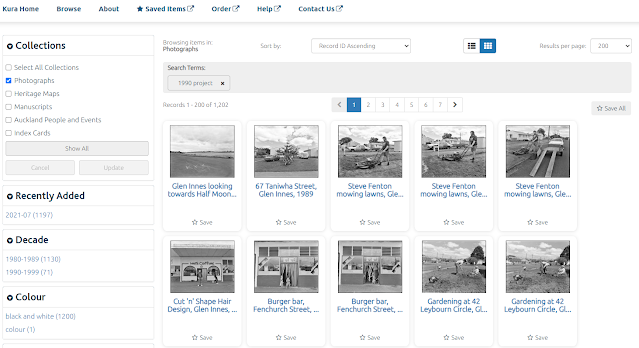 The exposure of Page’s photographs on the Facebook page Timespanner demonstrates our continued interest in the local. It also shows the value of documentary photography in capturing the familiar landscape and the dramatic and nuanced changes to the city. Looking at Queen Street today the difference is visceral. We don’t have an evening newspaper for sale. We look different but the streets look familiar.
Queen Street continues to be a good place for monitoring change in Auckland. Page spent plenty of time there in 1989 and 1990. The photo of the Civic Bookshop is my favourite – encapsulating the prosperous heart of the city. You see a book shop, a jeweller and a camera shop. These buildings in the Civic are mostly not occupied in 2021. The camera shop, the jeweller and the News Agent have gone. You might find a dairy but it won’t have this much going on:
The queues outside a record shop are also noteworthy now that the Covid-19 pandemic has changed our approach to crowd scenes. You don’t buy your concert tickets at the counter and the band is unlikely to come in to promote their concert. There are no cell phones! Sometimes it is the absence of what is now ubiquitous that stands out.
In ‘Cow on Mount Wellington’ – Rangitoto remains a constant but the Winstone’s Quarry is now
Stonefields’ housing development. Cows are no longer farmed on the side of Maungarei / Mount Wellington.
The make and model of car remains a sure way to date a photograph and get interest from the viewing public. Stuart Page has an eye for a great car photo. It is also noteworthy that the dairy in Tripoli Road in Panmure advertised that it sliced ham and luncheon sausage on demand in 1989.
The value of documenting Auckland with a team of talented photographers has provided us with a unique picture of Auckland – the people and the places and the animals and cars. Auckland Libraries has been documenting the changing city over two centuries. From photographer Henry Winkelmann in the early twentieth century, through to the 1960s street photography of Rykenberg Photography to the COVID collecting programme since 2020.
We knew it was a good idea to capture the look and feel of Auckland in 1990. Now that we can look back at the end of last century it’s a shock to see what has changed and what hasn’t. Enjoy reading these photos!
Over to Stuart Page for the last word:
The Auckland CBD and in particular Queen St is not a place that I currently visit very often, it has become less attractive to me and many others over the last 30 years, with the closing of many clubs, cafes and venues, and interesting shops are few and far between. In the 1990 photos we see people visiting and hanging out together in Queen St, in a way that is not so common today. I do still like to come ‘down the Queen’ to see movies at IMAX, pick up some records, maybe see a show at the Town Hall and visit the Art Gallery, but that’s about it.
I am far more likely to be found in and around Karangahape ‘K’ Rd or Ponsonby Rd, or somewhere in Grey Lynn, where I still manage to live despite property values soaring up past $2M to $9M or $12M for some do-ups with internal swimming pools. I am surrounded by shiny new showrooms filled with Lamborghinis and Bentleys, and high rise apartment towers peer into my backyard.
Cities are always changing, but in the 30 years I’ve been living in Auckland, I’ve managed to maintain a great group of supportive friends and have several favourite places to hang out with them. Of course I am currently spending nearly all my time at home in Level 4 lockdown, working on several projects and hoping to get them finished with little distraction and interruption. The silence is relaxing, and the weather is getting warmer.
I enjoy taking twilight walks to photograph the almost empty streets on my phone camera. Gosh, how cameras have changed from the big, heavy Mamiya 6x7 that I used on the library 1990 Project, to a tiny slim iPhone that I always have on me, and which allows making photos of a quality far beyond what it should do. I’ll post a couple of shots from around my neighbourhood taken in various lockdowns in the past 18 months.
Stuart Page, Grey Lynn, August 2021