The cancellation of this year's Heritage Festival prompted a challenge from one of our hoamahi | colleagues to the other members of our Heritage teams:

"I would like to celebrate the Auckland Heritage Festival by posting one of my favourite items from our collections this week, and I would like to invite you all to take part. The themes, as per the banner below, are topography, taonga and trailblazers!"

This resulted in an entertaining email thread that we thought was interesting enough to be shared more widely.

This is a (lightly) edited version of the emails that followed.

Let us know what your selections would be!
Sharon
I am going for topography. My favourite is this nice bright watercolour of North Head and Rangitoto, from a painting by Mrs Caroline Harriet Abraham. Mine is this one of the Long Bay Motor Camp in 1959, from the North Shore collection. Summer - pre internet, pre mobile phones, pre practically every form of technology we take for granted now. Seems like another world. 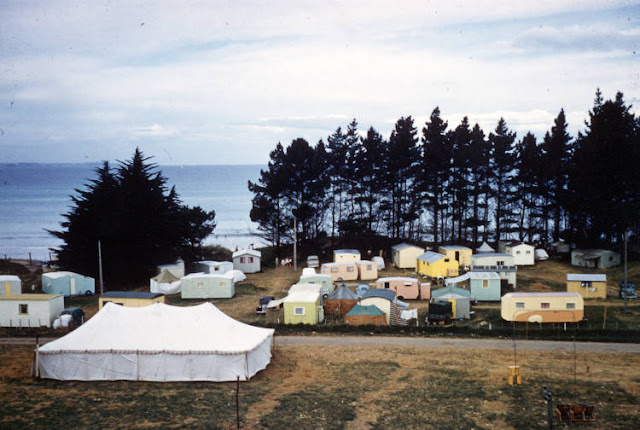 Mine is a photograph of Mr John F. Bennett with all the successful students from his music school. He made a lasting legacy in the Auckland music community through his dedication and vision. His music collection, gifted to Auckland Libraries, makes up a significant proportion of our heritage music collections. Thank you Mr Bennett! 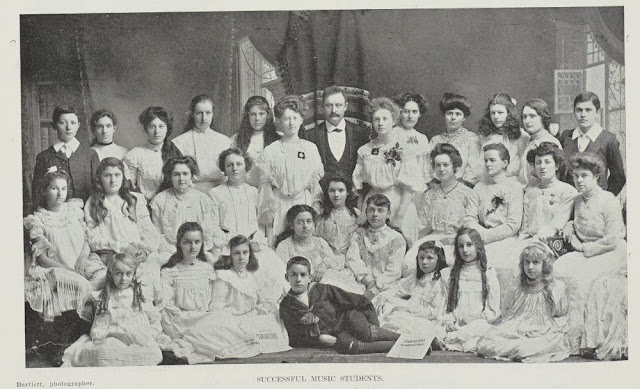 Mine is under the trailblazer category. Read more about this book here. 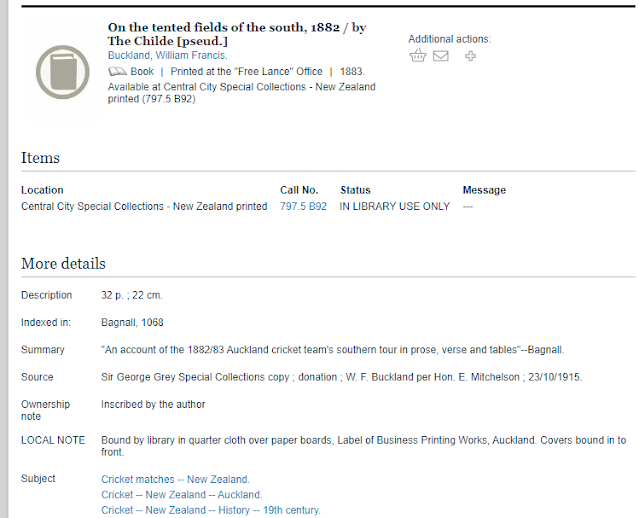 I love the aerial photographs – particularly this one that shows Ponsonby back in 1968. It hasn’t changed much! 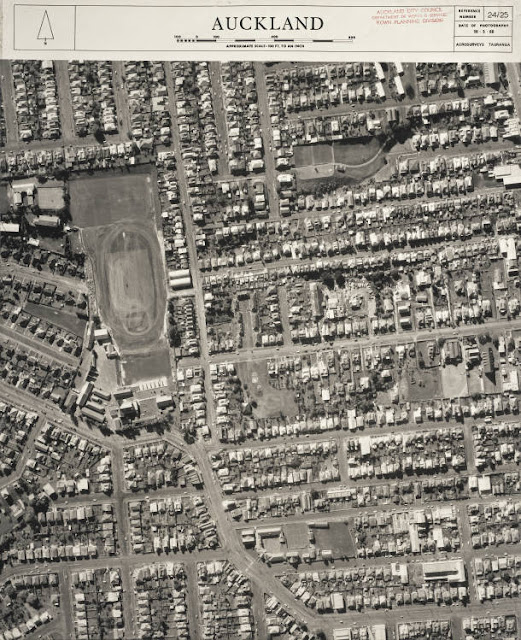 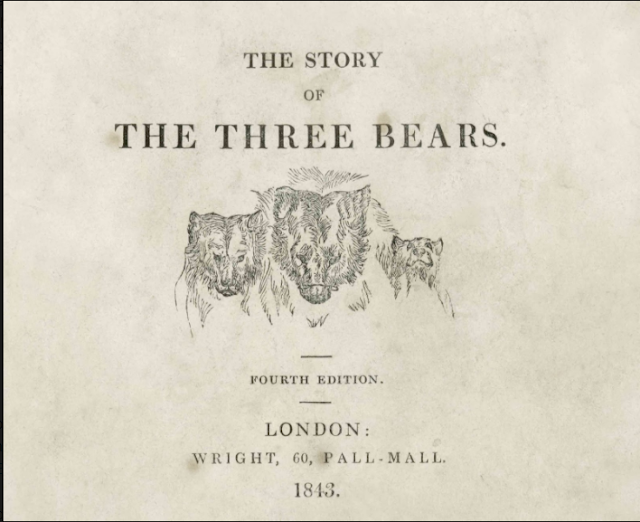 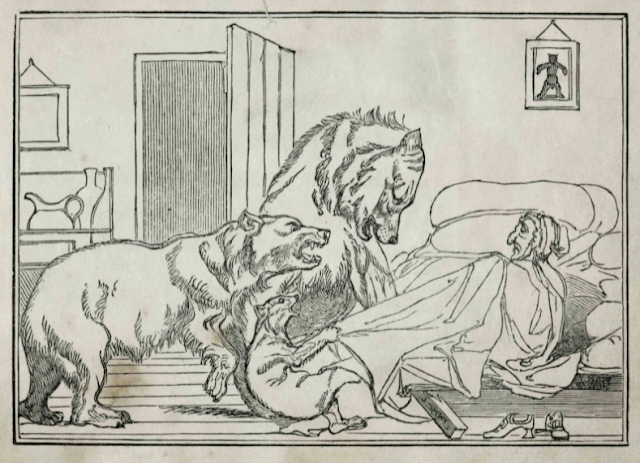 Ref: G. Nicol, The story of the three bears, 1843, Auckland Libraries Heritage Collections, 1843 NICO.
It wasn’t until the early twentieth century the old lady (Silverhair) was replaced with Goldilocks.

Our newspaper and serial collections are part of our taonga as they chronicle our social and local history. This example is from the Auckland Star, 3 February 1937. 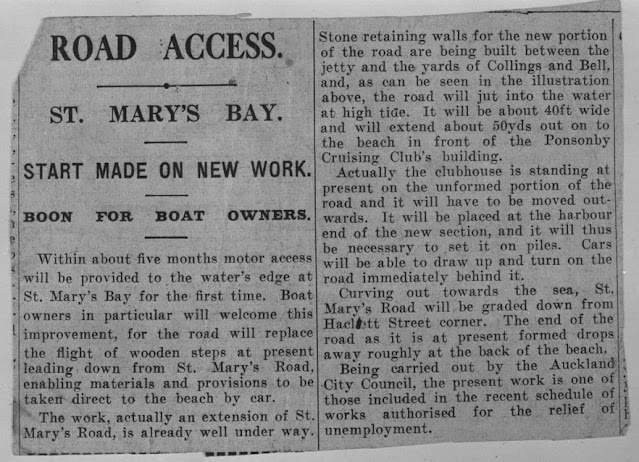 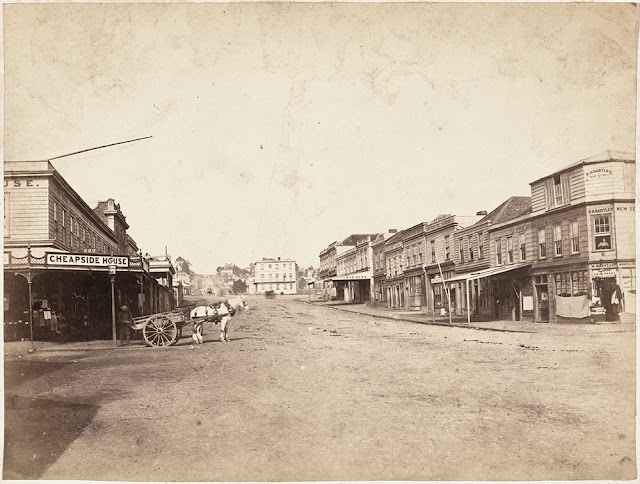 I love Ron Clark’s photographs of everyday domestic scenes. Taonga. Here is one of his daughter Pamela, studying, with Honey the cat on the desk. 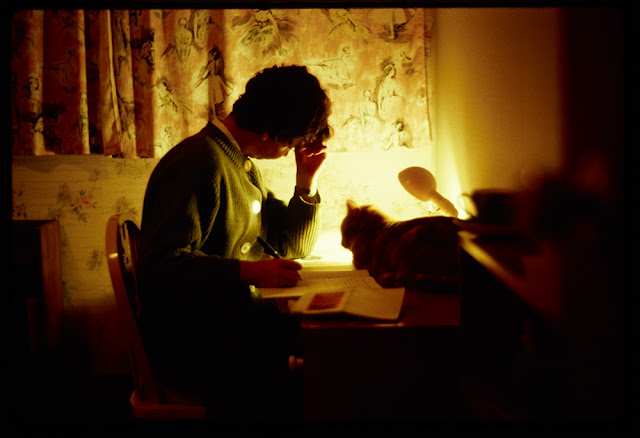 I love this photo. These women at Takapuna beach in 1908 look a little overdressed - but don't be fooled into thinking they spent every trip to a beach was fully clothed. 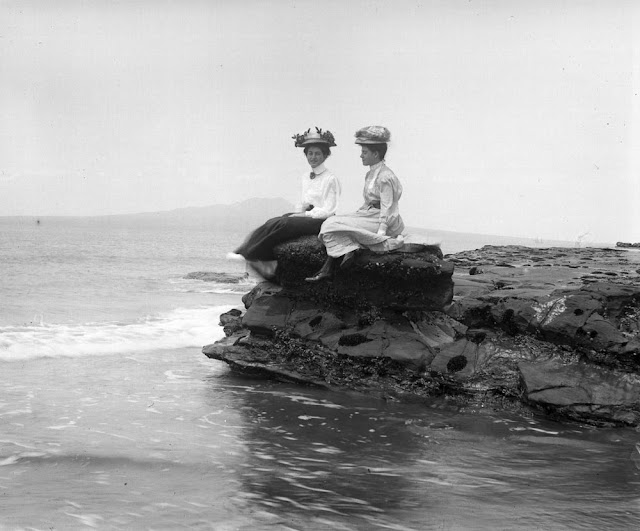 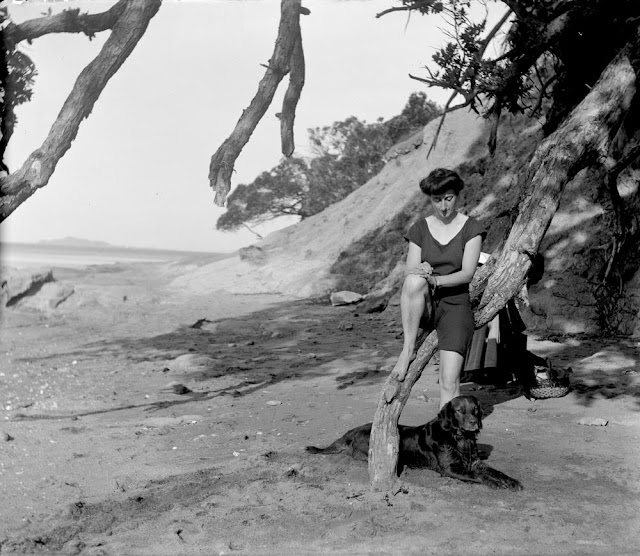 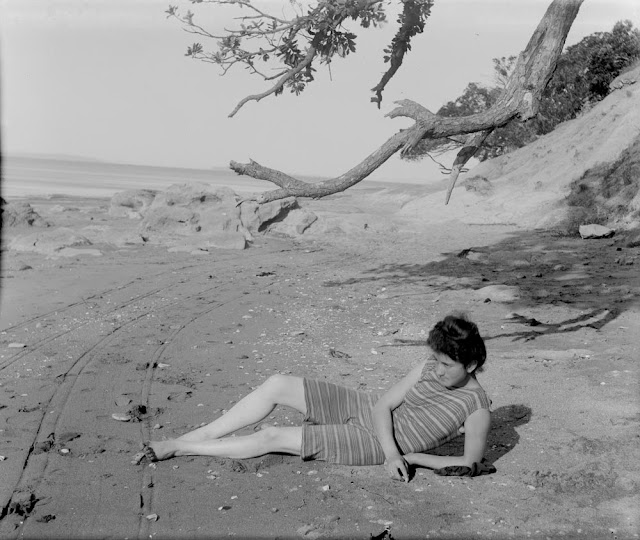 My choice for 'trailblazers' is the Dress Reform wedding from 1894, with all the women – members of the Rational Dress Association – wearing breeches! 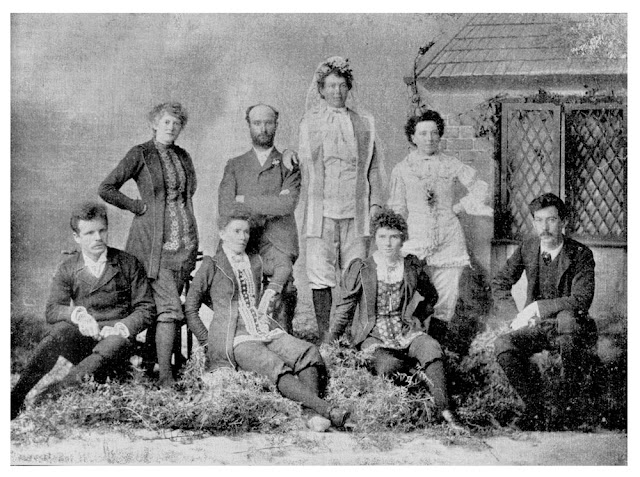 Another one for ‘trailblazers’ – this Niuean family farewelling the Tofua II at the wharf in 1950. 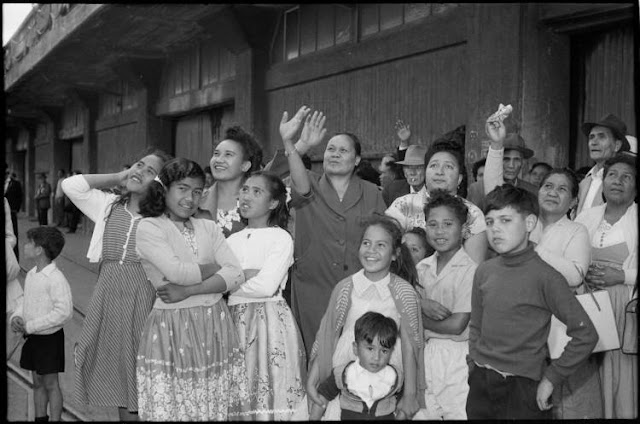 I’m going to be greedy with a topography trio. One topographical feature (Mt Ruapehu), three representations: Ron Clark aerial photo, a manuscript map, and a Thomas Ryan watercolour. I love the details shown on the map and because I was intrigued by the name, I investigated and found out that ‘Gliding Gladys’ (shown to the right of crater lake) is a glacier and historic lahar path. 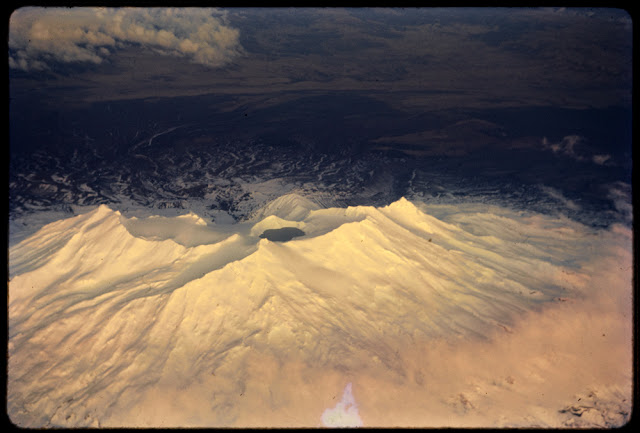 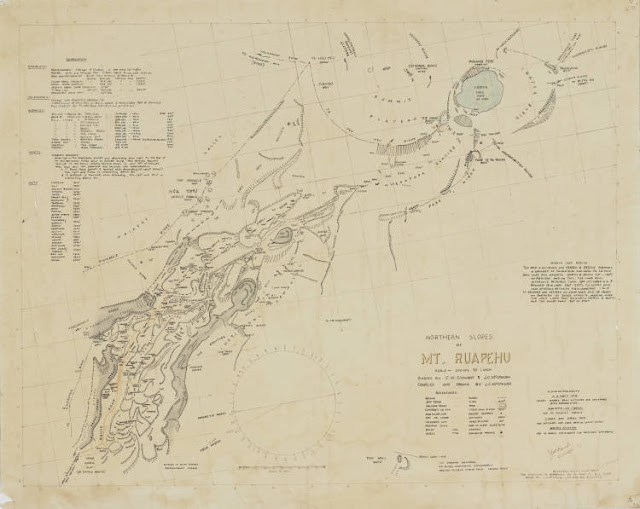 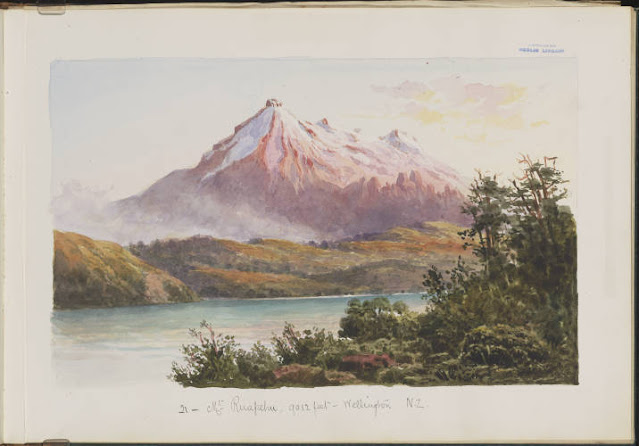 Inspired by Caroline Abraham’s watercolour of Rangitoto and North Head – which you started us off with Sharon.

This time it is an optical illusion – an interior shot in the Hokianga with a backdrop which takes us to Auckland Harbour. I like the sense of mischief from the participants – including the photographer. 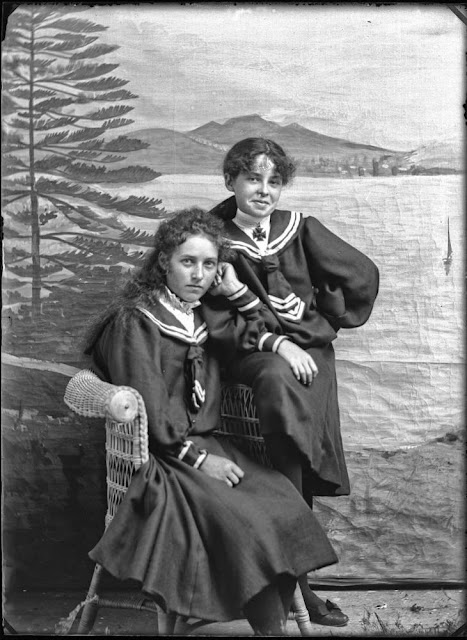