The Camp Gazette has been digitised and made available through Kura Heritage Collections Online.

During the General Strike of 1913 farmers from around the region were recruited as mounted ‘special constables’ and public servants were granted leave to serve as ‘foot specials’. In Auckland the New Zealand Farmers’ Union actively sought out volunteers from rural districts. These men came to be known as Massey’s Cossacks after the then Prime Minister, William Ferguson Massey. 1913 remains the most violent strike in Aotearoa's history, although most of the violence occurred in Wellington.

In Tāmaki Makaurau the Special Constables set up camp, initially in Ōtāhuhu, then moved to the main camp at the Domain. On 27 November the Domain Camp closed, and the mounted specials moved to a new camp at the polo grounds in Remuera (where the Dilworth Junior Campus is located today). They remained there until the last of them were paid-off in mid-December.

Even though the mainstream newspapers of the day were very much against the strikers, the Specials still felt that they needed their own publication. In the first issue they write, “This large body of quiet-living, solid fellows have felt the necessity of a temporary official organ, through which they can make themselves heard, and whilst returning the deepest thanks of the troops to the “Herald” and “Star” for their many kindnesses and attentions, it is felt the situation needs a journal edited in the camp and devoted exclusively to specials and strike matters.”

Thirteen issues of the Camp Gazette were published from late November 1913 to mid-December and then in late January 1914 a fourteenth issue was published which included a “Complete List of Mounted Special Constables Serving in Auckland During the 1913 Strike - compiled at great trouble and much time’’, comprising of 1 902 names. These names have all been indexed and can be found in Kura Heritage Collections Online.

As well as being a voice for the special constables, the Camp Gazette is an organ for prominent New Zealand firms reliant on trade with rural communities who are anxious to assure the readers they had not been giving discounts and supplies to help the strikers. Laidlaw Leeds have advertising space in the prime position on the cover of each issue. The first four issues are an exercise in corporate damage control after which they switch to more conventional advertising, trumpeting the virtues of the firm. 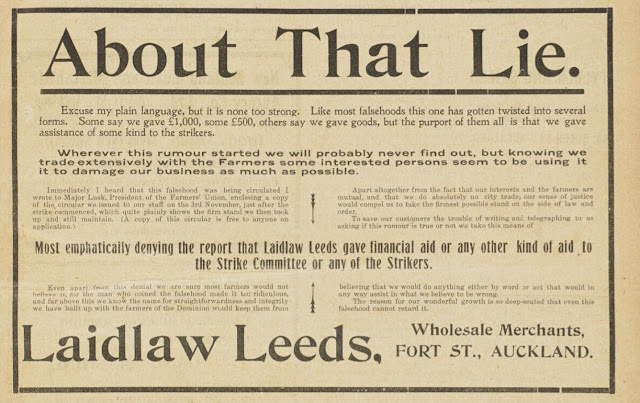 Many of these organisations continue to operate a century later. The Farmers’ Union is now known as Federated Farmers; the most significant advertisers in the Camp Gazette were Laidlaw Leeds and Northern Roller Mills, precursors to today’s firms Farmers and NRM. In the last issue the editors thank L. D. Nathan and Co. for their “handsome contributions to the creature comforts” at the camp, this, a firm inextricably linked with the history of Auckland until the controversial merger with Lion in 1988.

As well as being an organ for business interests The Camp Gazette also provides an interesting glimpse into the human side of life in the camps: the comradeship, the missing saddles, lots of poems and letters including one writer complaining the gifts sent in by grateful citizens weren’t equitably distributed amongst the specials. Another is about ‘malicious tramway employees’ who were quite hostile to the specials in the city. A variety of artists contributed cartoons and caricatures of some of the Specials. Here is Sergeant Wilson by JC Blomfield:

As well as complaints the paper also includes plenty of self-congratulatory pieces. An example under the headline, ‘A tribute to specials’:

“We are extremely pleased to be able to publish the following. Our informant, on Saturday night, whilst in a hairdresser's, heard one of the wharf foremen speaking in the most glowing terms of specials, who had undertaken lumping work. He said, amongst much that was complimentary, that if he set our men to a job he could rely it would be done, but the old hands had always to be watched, or the work, would be slummed, or neglected altogether. Moreover, the specials showed themselves extremely adaptable, and with little tuition could overtake successfully the whole of the cargo handling, and even act as efficient foremen themselves.”

The editors were resourceful. In the December 3rd issue they urge the specials to contribute to the paper, “Have a pencil in your pocket on night duty and jot down the little passing incidents. Our part lies in elaborating it.”

The last issue details the presentations and songs sung as the specials prepare to leave camp. It also includes a list of toasts proposed during this function. They included to, “Staff Officers”,  “The Farmers Union” “The Press” and “The Ladies”.

Also in the final issue Officers and Specials, before returning to the farm,  are cordially invited to visit the Hutchison Bros. Queen Street depot for suitable and seasonal presents for their wives, sons, and daughters. These gifts include ladies’ leather handbags and satchels, rocking horses and dolls prams and Meccano for boys.

Whether your interests are in social, labour, or family history this is a great resource so dip in and look for yourself!

Here is a small selection of other resources available for those interested in the General Strike of 1913: