By AkL - December 09, 2014
Over the next few months we’ll be running a series of posts featuring the digitised items in the Ephemera collections of Sir George Grey Special Collections, specifically focussing on the Old Colonists’ Museum (OCM) Ephemera Collection.

The Old Colonists’ Museum was opened by Mayor J.H. Gunson on the 22 March, 1916 and was located in the same building as the Auckland Public Library and the Auckland Art Gallery. 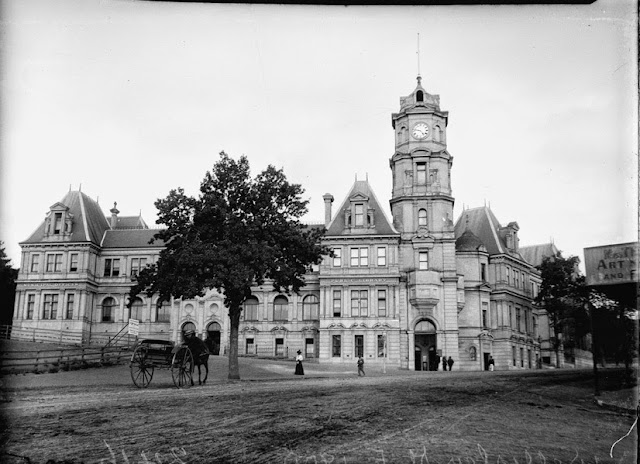 It occupied two large rooms on the top floor of the building and contained, “a collection of pictures, maps, prints, documents (printed and manuscript), and objects illustrating the history and development of New Zealand, especially the Auckland Province and City.” This quote is from OCM founder and director John Barr’s 1922 history of the three institutions, of which he was in charge until his retirement in 1952. Barr also states in this history that “the Museum owes its origin chiefly to the suggestion of Messrs. [Thomson Wilson] Leys and [Henry] Shaw, who were impressed with the Early Settlers’ Museum, Dunedin”.

Wynne Colgan notes in his commemorative volume on the Auckland Public Library, The Governor’s Gift, that the museum rapidly filled with objects donated by an interested public and that “as early as 1918 James Cowan, researching his history of The New Zealand Wars, was reported as finding in the museum much useful manuscript and pictorial material, “but in a very congested state”. John Barr also mentions this in 1922 regretting the “inadequacy of the accommodation wherein to exhibit satisfactorily the objects of interest which it contains.”

So what was the OCM filled with? In addition to the types of items shown in this post it included: large oil paintings by Gottfried Lindauer, the first wooden plough used in New Zealand, a bowl that belonged to Captain James Cook, and an armchair that was used to lower “Mrs. John King… from the brig Active on the occasion of the Rev. Samuel Marsden’s first visit to Oihi, Bay of Islands, on December 22, 1814.” (New Zealand journal of agriculture, 15 February 1951).

Here is an example of a bill of fare from our collection showing, unfortunately, no oysters on the menu when Governor Grey visited Southland. Perhaps the beds had already been depleted by then? 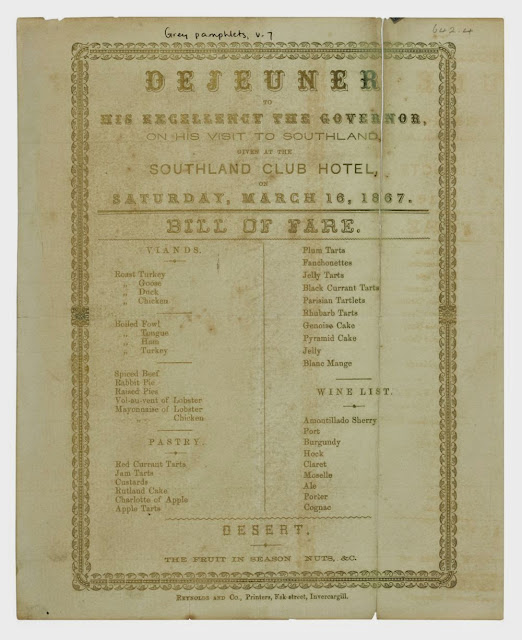 Ref: OCM Ephemera - 'Dejeuner to His Excellency The Governor on his visit to Southland', 16 March 1867, Auckland Libraries Heritage Collections.

This is a flyer with poems commemorating the opening of the Auckland Public Library and City Art Gallery: 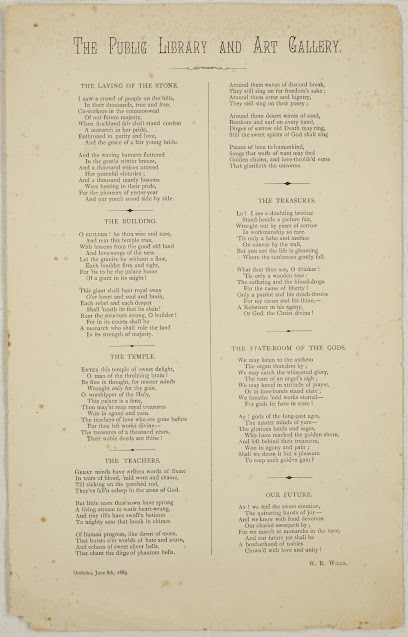 It seems that space rather than a lack of interest was the major reason for the closing of the OCM. Colgan points out that by 1955 more than 30 000 visitors a year were “prepared to puff up the two steep flights of stairs.” Indeed its congestion and location seemed to be an issue for many visitors, as seen in this letter to the editor from 1934:

As jam-packed as the OCM was it was not the only institution in the building running out of room. Colgan tells us that, “to get extra space for the repair of books, binding of newspapers and stiffening of periodicals before issue, meant taking over the two nearby rooms… filled with the contents of the Old Colonists’ Museum.”

Late in 1956 the council decided to close the OCM and offer its contents to the Auckland War Memorial Museum, with some exceptions. “Such items as maps, manuscripts, charts, literary documents and the like, were to remain with the Auckland Public Library for incorporation in to the reference department. And the Auckland City Art Gallery was to have such of the works of art as its director, Peter Tomory, wanted.” Thus we have the beginnings of what is now the OCM Ephemera Collection in the Sir George Grey Special Collections at Auckland Libraries. 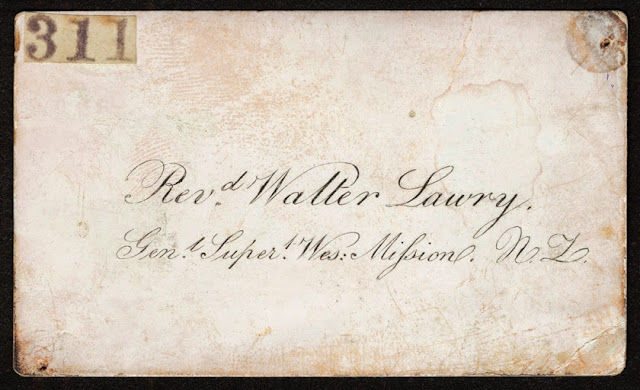 This transfer to the three places wasn’t straight forward. Colgan states that the director of the War Memorial Museum wanted all or nothing, while an article in The New Zealand Herald (22 August 1964) put it more diplomatically saying the Museum declined the offer due to, “A shortage of space, finance and because it considered the documents removed from the collection deprived it of its special significance.”

Interestingly the same article also claims that, “everyone approached on the subject of the Old Colonists’ Museum insisted that far more historical relics of public interest remained outside the museum than ever found their way into it.”

This meant that council decided to store the objects that had been offered to the War Memorial Museum under the stage at the Auckland Town Hall, where they remained for 9 years. In 1966 the objects were accepted and included in the permanent exhibition at the Museum called, “Centennial Street”.

Whilst doing some reading about the OCM I found a fascinating clipping in one of the New Zealand Scrapbooks about a supposed medal of Charles Heaphy’s from the New Zealand Wars.
The article states that the medal was found in “a box of trinkets” and that Mr. Peter Holmes who found it intended on presenting it to the War Memorial Museum as they already held Major Heaphy’s Victoria Cross.

The article from The New Zealand Herald on 17 July 1963 has been annotated, presumably by the librarian who indexed it, noting that the “City Librarian intervenes and the medal is given to OCM instead…Now on display at Ranfurly Home.”

If anyone reading knows any more about this curious annotation or the fate of the medal please do let us know in the comments. While the medal is not part of the OCM Ephemera Collection it does include a ball programme from 1868 where Heaphy was one of the stewards: 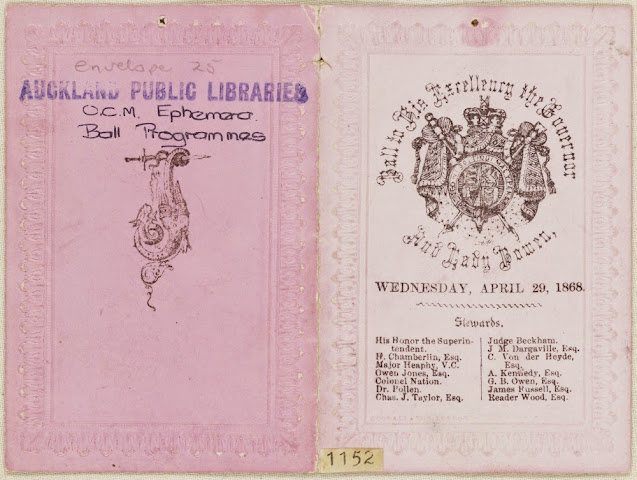 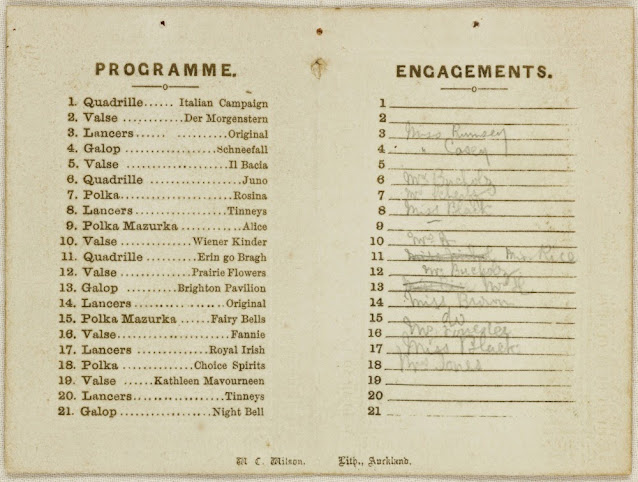 Ref: OCM Ephemera - 'Ball to His Excellency the Governor and Lady Bowen', 29 April 1868, Auckland Libraries Heritage Collections.
At the beginning of last month Carolyn wrote a post about Great Barrier Island’s Pigeon Post, and we put up a photograph of a Pigeongram. The original Pigeongram that was sent for help is also actually in the OCM Ephemera collection: 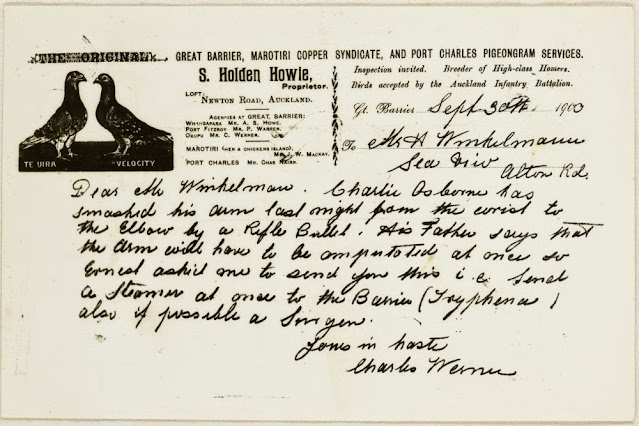 Do check back over the next few months to see more wonderful items from the Old Colonists’ Museum Ephemera Collection. In the meantime you can search for ephemera via the Ephemera Index (using the keywords ‘old colonists’ museum’ for the digitised OCM materials) and read more about some of our opera ephemera here.

For further reading about the Old Colonists’ Museum you can use these sources:
The scrapbooks have been compiled mainly from the "Auckland Star" and "New Zealand Herald". Useful articles were pasted into these scrapbooks, including Auckland or New Zealand history or obituaries, and these were also indexed into the New Zealand Card Index, which is now housed in the Auckland Research Centre at Auckland City Libraries. These are searchable online via the NZ Card Index as well as Index Auckland.