By AkL - October 07, 2015
This week marks Ni vosa Vaka-ITaukei ni vanua o Viti or Fiji Language Week for 2015. This is timely as we can happily share the news about some nineteenth century Fijian language items in Sir George Grey Special Collections that have recently been individually catalogued.

These Fijian language items were part of a larger collection of nineteenth century pamphlets in English, Polynesian and Melanesian languages collected by Sir George Grey. They include grammars, primers, vocabularies, and religious texts. The pamphlet shown below is an arithmetic textbook published in Levuka in 1865. 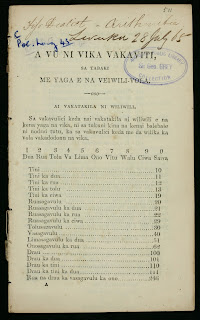 “While in New Zealand, Grey had naturally extended his interest in languages to those numerous languages and dialects of the Pacific. For access to such materials, he found it vital to develop contacts with the missionaries in the Pacific (such as Walter Lawry and Thomas Buddle in Fiji) and others who were less closely related, but who nevertheless printed and supplied the kind of material he desired. (p.129)”

You can read a letter dated 8 October 1851 from Buddle to Grey with a post script saying Buddle had enclosed “a copy of a Fijian Grammar lately [received] from the Islands.”

Below is an example of the type of materials missionaries were publishing at the time. This is the 1855 edition of ‘The teachers manual’ by the Rev. R.B. Lyth which was published by the Wesleyan Mission Press in Fiji. 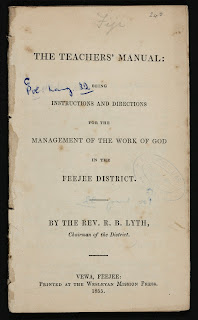 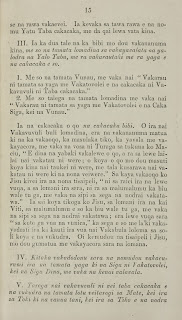 Grey’s interest in indigenous languages has resulted, more than a century and a half later, in these pamphlets being available for the public of Auckland. On the significance of Grey’s work, Kerr says that:

“The man most suited to comment on Grey as a collector of indigenous language materials was of course [Wilhelm] Bleek. In a letter to his friend Haug in December 1857, Bleek describes fully Grey’s position and his place in the future. To Bleek at least, it was secure:

You can hardly imagine how enormous the library of Sir George Grey is in this field and how much time and money he spends to make this library complete. Only a man in his position, with his means and his ardent scientific desire for the subject can gather such a collection. I am quite convinced that nobody else would be able to collect even a third of this material. There are amongst them some books of hardly half a dozen leaves or less, which cost thousands of pounds to procure. But they are not just unique in themselves, but also are the only evidence of an otherwise completely unknown language, philologically and ethnologically of great importance… May he live to do still more important work. (p.132)”

128 Pacific Island language works that Grey collected while he was the Governor of the Cape Colony were transferred from South Africa to Auckland Libraries in 1978. This geography textbook and could be of interest to contemporary researchers of colonial pedagogy. 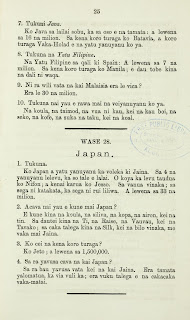 The pamphlets were bound together shortly after Grey gave them to the library in 1887, as the 1888 catalogue describes them as, “The pamphlets catalogued below are bound in volumes”. The Fijian ones were Volumes 76 and 75.

However following the change to subject departments when the library moved into this building in 1971, the pamphlets were disbound. We hunted around in the basement and found an empty binding saved from the disbinding of most of the pamphlets to give an example of how researchers would have used them for much of the first hundred years after Grey donated them. 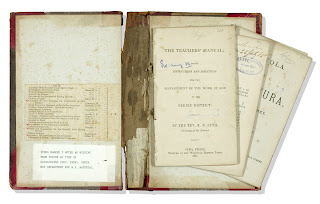 Ref: Selected pamphlets next to binding.

An inventory of the pamphlets was completed by David Verran in 1994 to help provide access to interested readers. Now each pamphlet has been described in full and they have individual records in our library catalogue.

Try a search on ‘Polynesian and Melanesian historical pamphlets’ and if you see anything that is of interest come up and request it in the Sir George Grey Special Collections reading room on the second floor of the Central Library.