By AkL - June 22, 2015
At least nine of Auckland Libraries’ past or present community libraries are either war memorial buildings or have war memorial associations.

The oldest of these is the Albany Memorial Library. On Peace Day 19 July 1919 a group of Albany residents resolved to build a library as their district’s war memorial. Architect Sholto Smith designed the building. Governor-General Lord Jellicoe opened the cottage-style, half-timbered structure on 21 December 1922.

The library was approached via a stone arch with ‘1914-1918’ inscribed on the keystone. The words ‘Albany Memorial Library’ were displayed above the entrance. The east window commemorated the Great War. Inside, a brick fireplace incorporated a green marble memorial tablet listing the names of 23 local men who gave their lives during the First World War. (Another tablet was later added honouring seven dead from the Second World War.)

The building functioned as a working library until 2004, and is still available for community use today. 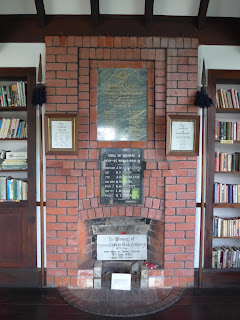 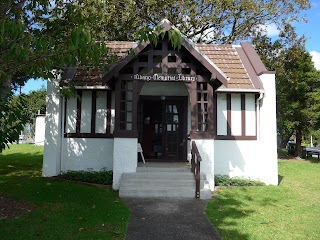 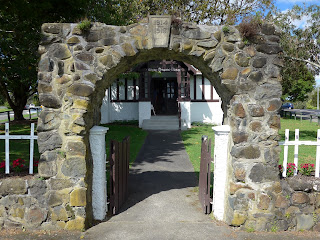 Auckland’s other memorial community libraries all date from after the Second World War, when ‘living memorials’―memorials with a practical purpose―were more usual than purely commemorative memorials.

In December 1954 the Wellsford public library was moved into the town’s new war memorial building on the Great North Road. A memorial shrine was set up in the foyer, where a wooden tablet was displayed listing 21 names from the First World War and 23 names from the Second World War.

Although small in size, the library served the community well for almost sixty years. In 2013 a new and much grander library building was erected beside the former showgrounds (now known as War Memorial Park). The new Wellsford War Memorial Library (Te Whare Pukapuka O Wakapirau he Tohu Whakamaharatanga ki Ngā Pakanga) was opened with a dawn blessing on 17 June 2013 followed by a community celebration five days later.

On 25 April 1937 Gordon Coates, MP for Kaipara, himself a decorated war hero, had unveiled the Wellsford First World War memorial at the entrance to the showgrounds. The memorial consisted of a bluestone arch of remembrance and ornamental iron gates. A granite tablet on one pillar listed the names of nine of the district’s fallen. Another tablet was added after the Second World War with a further 17 names.

As part of the new library project, the war memorial pillars (the memorial gates had been rebuilt without the arch in 1958) were re-positioned on the plaza in front of the library. The roll of honour from the old library was also transferred to the new library. 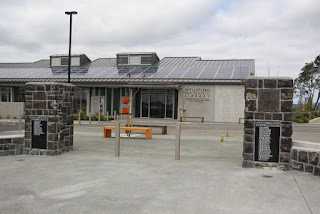 The Papatoetoe Civic War Memorial was opened next to the Papatoetoe Town Hall in St George Street on 8 October 1955. The two-storey building housed a public library, a concert chamber or memorial hall, and the Papatoetoe RSA clubrooms downstairs, with the Papatoetoe Borough offices and Council chambers upstairs. A roll of honour was unveiled in the hall listing men of the Papatoetoe and East Tamaki districts who had died during the two world wars. 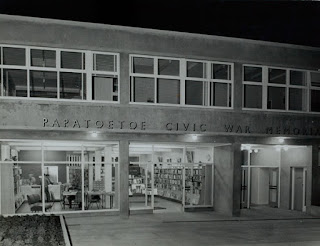 In 2013 the space between the RSA building and the memorial library was revamped. It now incorporates a section of an outdoor artwork by Regan Gentry entitled ‘Learning Your Stripes’. The artist has enlivened the walls of the RSA building next door with coloured aluminium stripes representing the war medal ribbons, while the trunk of a nearby totara tree is outlined by curved benches painted in a bright poppy red. 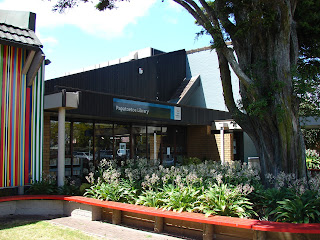 The Northcote library has never strictly speaking been a war memorial library, but it was formerly housed in the Northcote War Memorial building in Rodney Road. This was opened by Minister of Internal Affairs S.W. Smith on 10 March 1956. Designed by Thorpe Cutter Pickmere & Douglas, it incorporated, besides the library, a community hall and the local Plunket rooms. The Northcote First World War roll of honour, a wooden tablet which had originally been unveiled in the Council offices in 1917, was transferred to the new building, accompanied by a new marble ‘Borough of Northcote Roll of Honour’ listing the borough’s dead from both wars.

In July 1957 the Northcote Book of Honour, designed by Gordon Kilham, was also installed in a glass case in the foyer.

In 1967 the library was transferred to the new Council building in Kilham Avenue. In 1982 it was moved again, this time into a new building in the Northcote Shopping Centre. The library lost even an indirect claim to war memorial status when it moved out of the Rodney Road building. However, for some years, the Book of Honour has been displayed in the library. 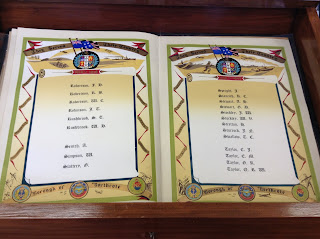 The original New Lynn War Memorial Library was opened in May 1957. This was one stage in the development of New Lynn Borough’s war memorial community centre planned for an expansive site between the Great North Road and Totara Avenue. (On 25 April 1958 Governor-General Lord Cobham unveiled the borough’s war memorial cenotaph on the memorial lawn near the library. This included a bronze triptych by the well-known sculptor Richard Gross.) 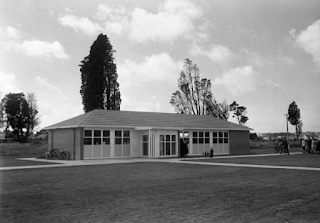 
The area later became known as ‘Memorial Square’. A major reconstruction of the square and environs began in 1997. The revamped square with its new war memorial was rededicated on Armistice Day 1998. A new library building was later built nearby, and this was officially renamed the New Lynn Memorial War Library when it was opened on 18 October 2005. 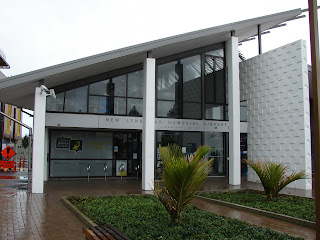 On 14 May 1961 the Minister for Internal Affairs Leon Gotz opened the Warkworth War Memorial Library. The shrine of remembrance within the library was dedicated by Rev. J.H. Bailey. This incorporated bronze plaques recording the names of local men who had died in both world wars.

A new library building overlooking the river was opened by Mayor Doug Armstrong on 29 October 1994. A plaque at the entrance records: “On this day the War Memorial status was formally transferred from the previous Library site in Alnwick St with the agreement of the Warkworth and Districts Returned Services Association and the people of the area.” The building was rededicated as a war memorial library on 21 April 2009, at which time the refurbished memorial plaques were again placed inside the entrance. 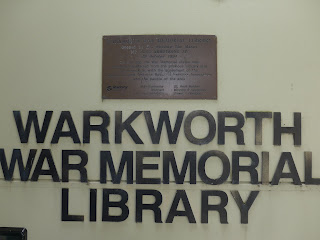 The Onehunga library is not a war memorial library, but does hold the Onehunga Book of Honour. When the Onehunga War Memorial Swimming Pool was opened on 27 October 1956, it displayed not only a polished black granite memorial slab on a wall at the main entrance, but also a Book of Honour in the lobby. Hand-lettered by Miss Hilda Wiseman, this included 90 Onehunga names from the First World War and 81 names from the Second. One page was turned each day.

The Book of Honour is now displayed in the library, alongside a key presented to the Mayor of Onehunga, Archer Garside, on the opening day of the memorial swimming pool. 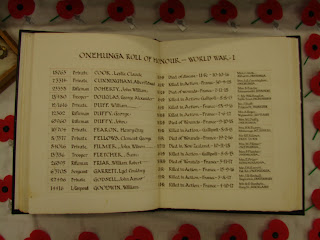 Two further community libraries have memorial associations. Although the Titirangi library has never been a war memorial library, it did form part of the Titirangi War Memorial Hall and Community Centre complex when Governor General Sir Bernard Fergusson opened this on 30 January 1965 (the Titirangi roll of honour for both world wars was set into the exterior western wall of the hall right outside the library entrance). 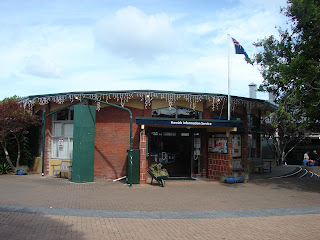 Between March 1957 and September 1975, the Howick library was housed in the Howick War Memorial Community Centre in Picton Street. The library was then moved to larger premises on the ground floor of the former Howick RSA building in Moore Street. In 1997 it was relocated to Uxbridge Road. The war memorial building now houses the Howick Information Service. A memorial plaque at the entrance recalls its original purpose. 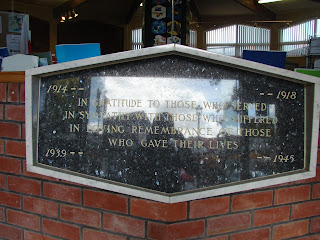 New Zealand’s soldiers in the First and Second World Wars fought for the ideals of equality and freedom. It is fitting that a number of our community libraries honour their deeds.