By AkL - November 27, 2014
Queen Street’s St. James Theatre has been in the news recently, with the announcement by its new owner of plans for restoration, in conjunction with the development of an adjacent 39 story residential tower.

The Category 1 listed building was opened in July 1928, with a performance of the London Musical Comedy ‘Archie’. The images below are the cover and the centre pages of the programme from that evening: 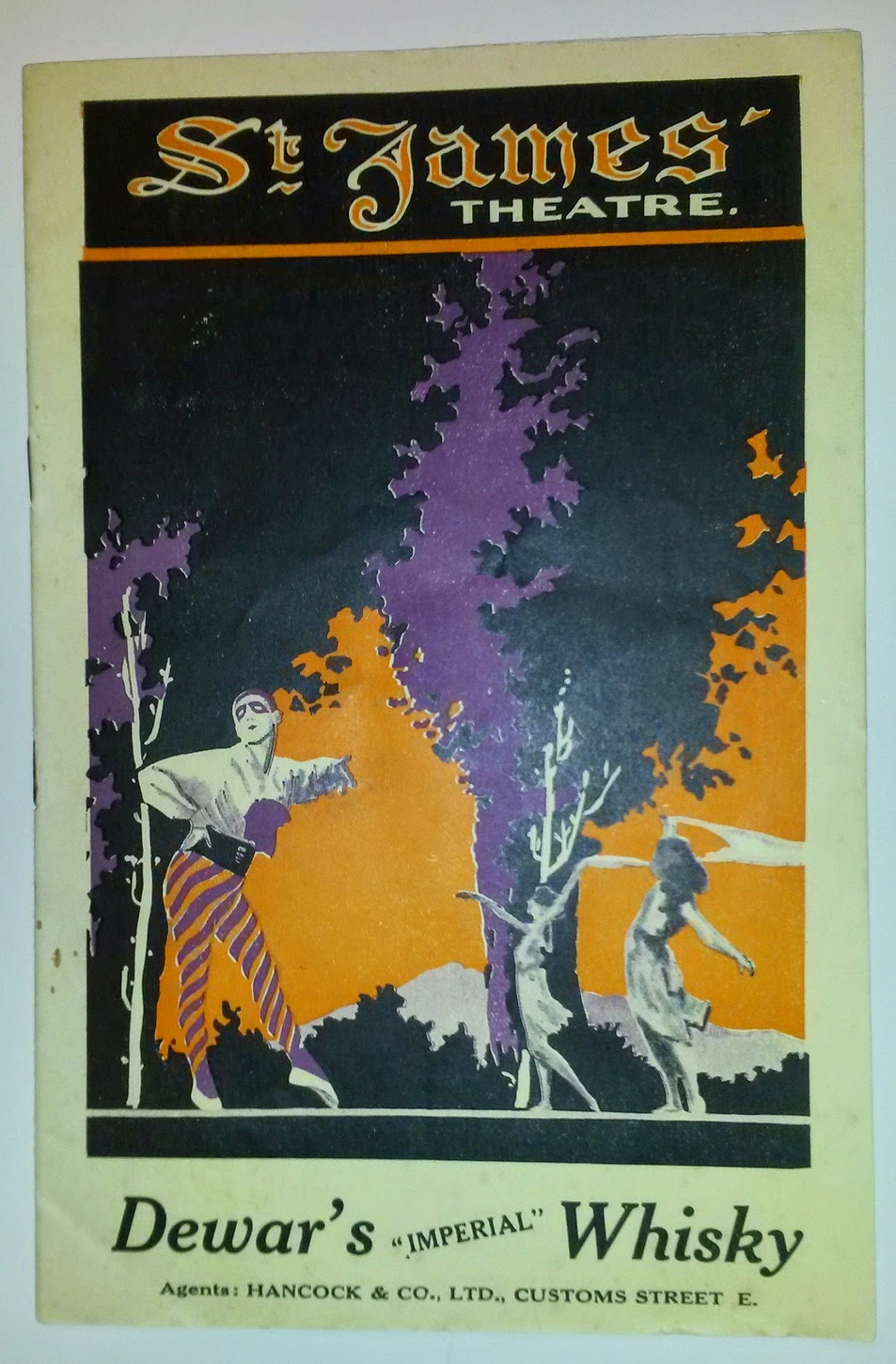 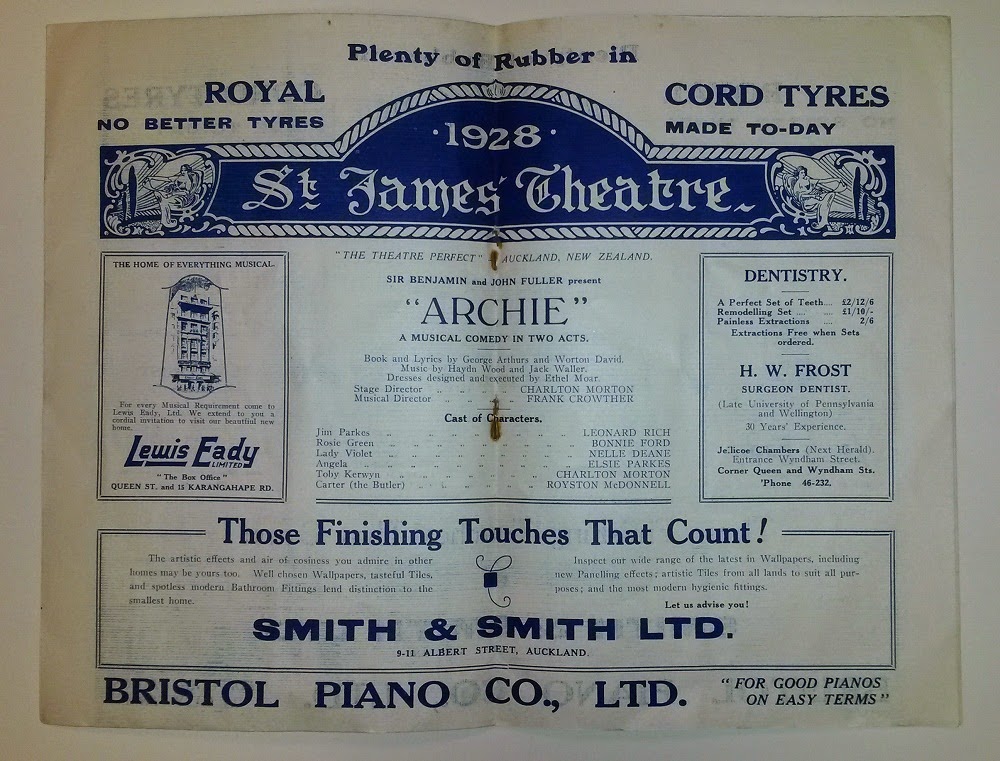 The St. James theatre was designed by architect Henry Eli White for its owners Sir Benjamin Fuller and his brother John Fuller. White was responsible for a number of theatres in Australia and New Zealand, including the St. James Theatre, Sydney. This was also built for the Fullers, who owned a significant theatre and retail businesses across the two countries. 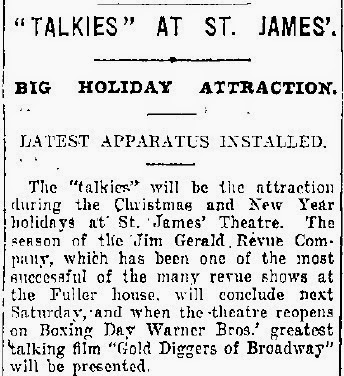 The “new thrill” of movies at the St. James commenced on Boxing Day 1929 with ‘The Gold Diggers of Broadway’.

The Projectionist for that very first night was Jack Cook, who remained in that role until his retirement 41 years later at age 74 (‘Out with the light.’ Auckland Star, 6 February 1970, p6).

This photograph, from either the 1930s or very early 1940s, shows the elaborate exterior façade and pinnacled tower of the St. James. 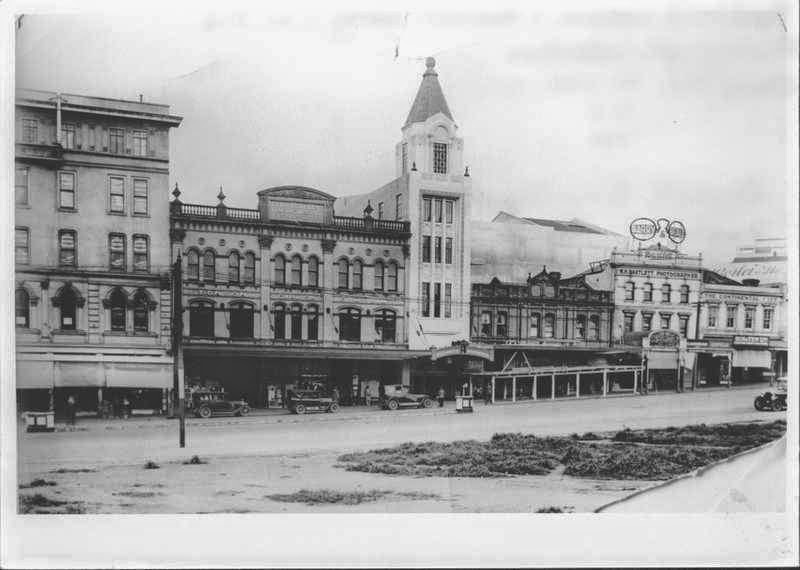 However, the façade and tower were hidden by the addition of metal sheeting in order to modernise the appearance of the building in time for the visit of Queen Elizabeth II in 1953. 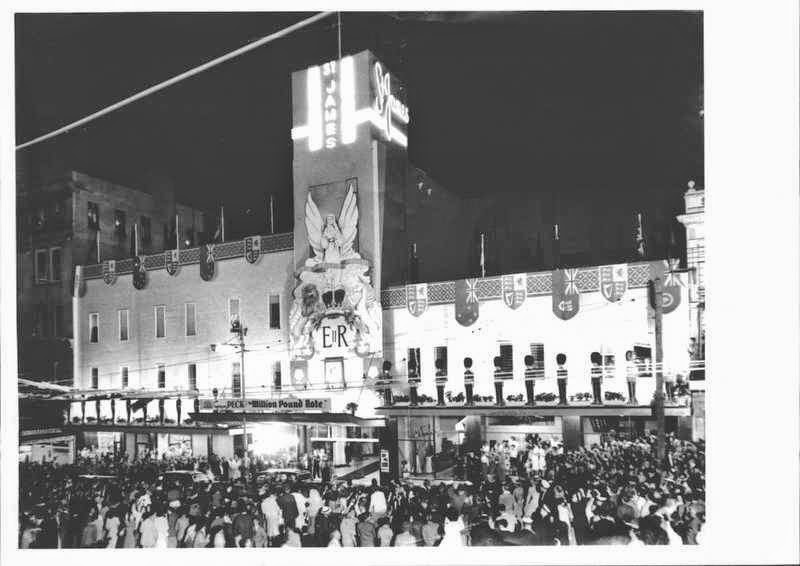 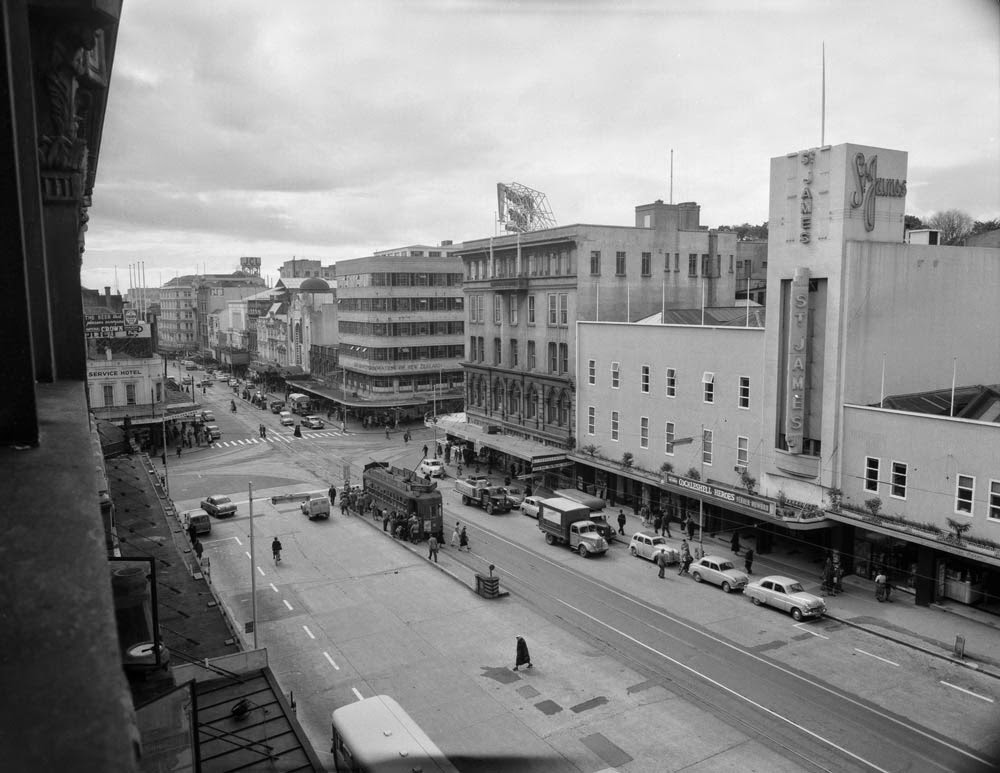 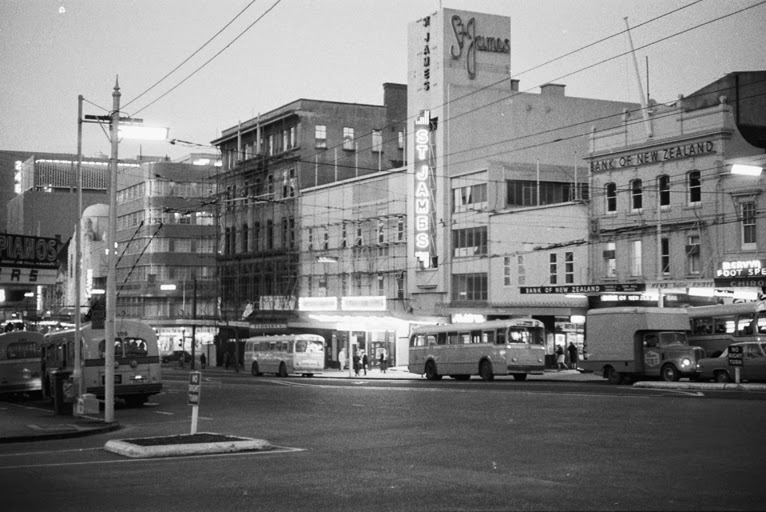 Looking at the outside of the building now, it is hard to picture the treasures of its interior. 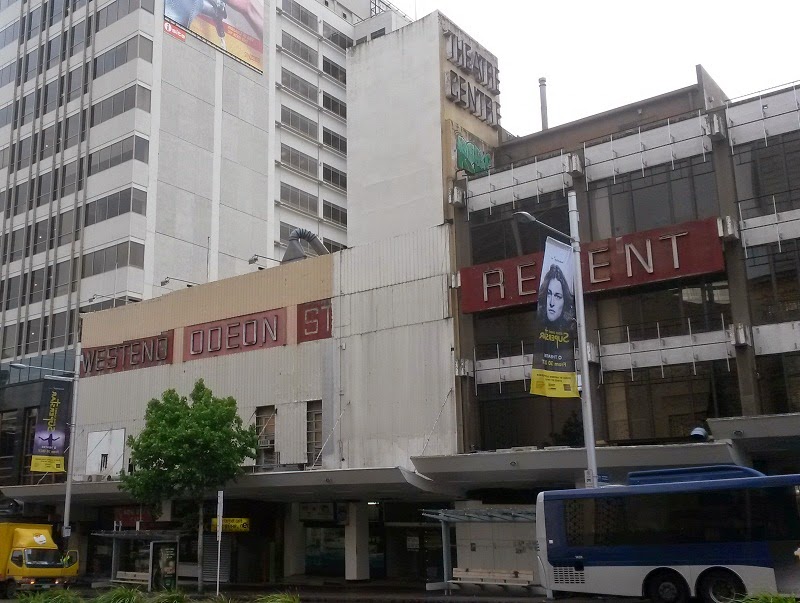 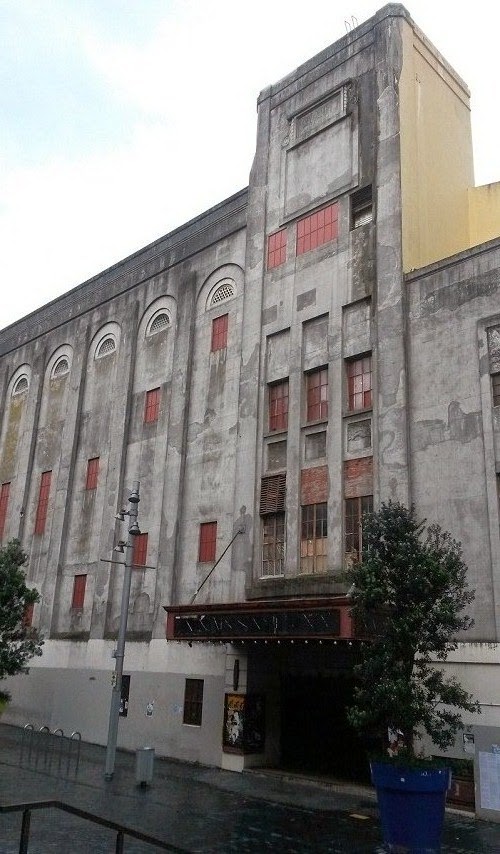 However, its Spanish-Renaissance style interior is well preserved. The main auditorium has three tiers of seating plus boxes, elaborate lighting and ornate plasterwork decoration; items of heritage value include statuettes, the terrazzo flooring and the grand marble staircase. Have a look at the New Zealand Herald’s St. James Theatre Picture Gallery and the photos on the Save The St. James Facebook page.

Closed in 2007 due to safety concerns following a fire in the west wing of the complex, there have been a number of plans for the St. James mooted over the years, with an active Save the St James Campaign running since 2010.


In the light of the current proposal, Aucklanders may well be wondering if the St. James might again become worthy of its 1928 proclamation as 'Auckland's Greatest Theatre.' 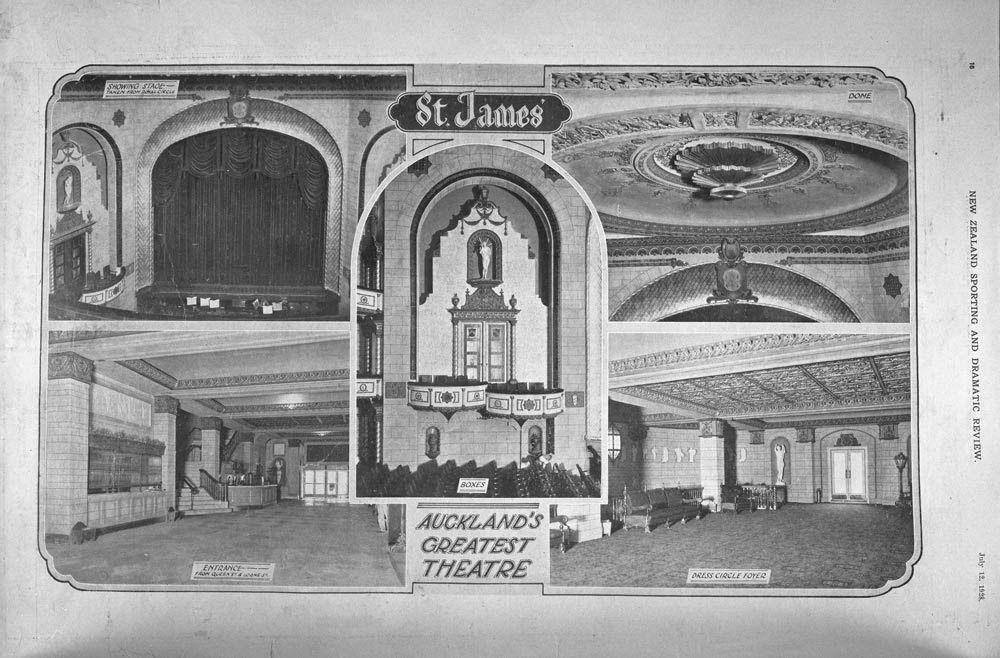 Auckland Libraries has a number of resources to explore if you are interested in learning more of the Theatre’s history: